The last 2 weeks of my project were very analytical. I looked at the 6 weeks of data that I had recorded throughout the summer and had to decide how to present it. I settled on bar graphs and error plots to best describe my settlement data. The most significant trends in the inner basin were that the colonial tunicate Distaplia occidentalis was more abundant than in the outer basin and that it increased steadily in settlement each week, starting at a mean of 7 in week 1 up to a mean of 188 for week 6. There were very few barnacles in the inner basin, whereas in the outer basin I noticed a decrease every week in barnacle (Balanus sp.) settlement, most noticeable at my site 6. I started with high numbers in week 1 (mean of 60) to week 6 (no settlement).


I wish I could have stayed longer to continue the research on fouling species because a 6 week data set is simply not a large enough picture. I was lucky enough to have a student continue where I left off on my research to continue to study the trends between and across the basins, especially as we enter another season. I expect the summer settlement to be different from fall settlement based simply on the trends that I noticed progress with the season. I am excited to see the data that comes along with the continuation of this study and how the seasons may affect the settlement rates of the fouling species studied.
Posted by Anonymous at 2:08 PM No comments:

Although it might be a trite saying, this summer really has flown by. But I suppose that's a true testament to how valuable and engrossing this summer research has been. From the stormy and wild research cruises in Bellingham Bay, to the long hours in the laboratory, my experience this summer has been certainly been eclectic. 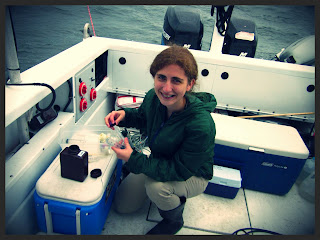 For a long time I've been aiming towards a career in biological research. And with my recent adventures into marine science and education, I have felt I've found a true passion. This summer, the experiences I've made here at Shannon Point have been invaluable to finding exactly where I want to be as I continue my education and pave the foundation for my career.

Scientific research internships coming out of community colleges are often few and far between. I believe any community college student thinking about the sciences as a career path or simple just has curiosity for the inner workings of the natural world should think about participating in one of these internships. COSEE Pacific Partnerships was a true privilege to work with; the experience and knowledge gained from the internship was unique, exciting, and encouraging. I think any student would benefit from having this contact with the wide world of research. Apart from having a simply amazing and enjoyable summer, there are many life and job skills that prepares a student for the challenges that lie ahead.

Additionally, I would like to thank all the faculty and staff at Shannon Point Marine Center. Everyone was incredibly nice and supportive of the research and our pursuit of marine knowledge. I would like to also thank my incredible advisor, Dr. Apple. You have been a great instructor and a fantastic supporter of my efforts and ventures into oceanographic research, something that is truly valued.

The ocean is truly an amazing place, and I feel privileged to have spent the summer exploring lingering questions and research! I will never forget this tremendous summer.

Natasha: All Together Now

At the end of the internship, it's quite astonishing to look back through the summer months and see all the data and work accomplished so far. It has no doubt been a productive summer in the Bellingham Bay research study. But before we get into too much detail, let's catch up to the last week of experiments...

In one of our final cruises, we had observed something quite peculiar and unexpected- the layer of hypoxia normally resting upon the seafloor bottom was raised up into the water column. The dissolved oxygen minimum was there in the middle of the column, somewhere right above 20m depth. While similar phenomenon had been observed in 2011, the reappearance of this had raised additional questions: What were the characteristics of this uplifted hypoxia and what caused it?

Dr. Apple and I put together one last experiment to investigate the respiration of the bacterioplankton at the bottom and in this uplifted hypoxic layer. Specifically, we wanted to know whether these communities were carbon and/or temperature limited and if there was substantial differences in these limiting factors between the very bottom water and the dissolved oxygen minimum


The testing procedure for respiration was much like the previous experiments I completed looking at the flow of low dissolved oxygenated waters out of the bay. It was done by titrating, only with the specific carbon and temperature treatments added to sets of samples. To provide a better understanding of how a specific variable affects the respiration, the treatments were designed in attempt to isolate the potential factors.

After nearly 48 hours of incubation, the titration marathon was started. Eventually, after 13 straight hours of work processing the samples, I had the data. The results indicated that both communities were carbon limited, while the direct effect of temperature did not substantially alter the plankton respiration.

The data provided us valuable insight the nature of these two areas of the water column during this period of uplifted hypoxia. When examining the water column during this period, the influx of cold, saline water at the very bottom suggests that mechanism for the raised layer was the penetration of ocean water from outside the bay under the hypoxia and subsequently lifting it.
This brief period we saw this hypoxic layer lift provided an interesting insight to the overall "story" of the summer hypoxia. From the early phytoplankton blooms, the consequent acute dissolved oxygen minimums from the increased respiration of this organic matter, to the gradual recovery of the system, Bellingham Bay is a dynamic coastal estuary. The research this summer provided new information and links valuable to the study, but also prompted new questions and opened additional avenues and directions for future research!