Sean - How to See a Front

Trying to understand and visualize the formation of an oceanographic front was difficult the first week of my internship, but going out on the boat this last week and reviewing the data that we collected  was not only very rewarding but allowed me to better comprehend the complexity of the body of water near shore and how its movement, stratification, and mixing could have a large impact on the organisms that are subject to it’s changes.


The front that we are studying directly out of sunset bay forms due to northerly winds and the waters interaction with nearshore rock outcroppings, creating a front that separates the body of water within  sunset bay and the body of water outside of the formation.  Although the front formation was not very clear with my untrained eye, we were able to use drifters, small wooden bobbers that float on the surface of the water, to see how they were affected by the front.  We deployed drifters just inshore and offshore from the front and both times they appeared to drift along the front formation from its northern extent to the southern extent.  As I said in my last post, a front can either be convergent or divergent.  At a divergent front the bodies of water on either side have a net movement away from each other while at a convergent front they are moving towards each other causing downwelling and movement away from the front at lower depths.  At a convergent front, floating debris and foam, tend to collect along the front as they do not sink with the downwelling water and remain on the surface. The following map displays the tracks created by underwater kites, called drogues, that are used to follow the currents at the depth the drogues are placed at.  All of these drogues were placed at 1.5 meters, with two of them placed shoreward of the foam line and the other two seaward. 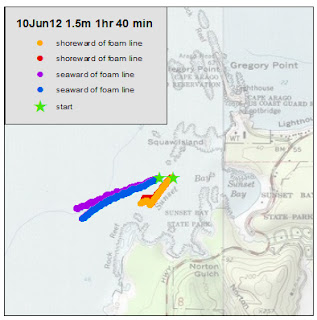