I finished the wounding experiments this week after tracking the regrowth of the wounded arm on 5 sets of Dendraster excentricus larvae. Many of the larvae healed so well in a week that it was not possible to tell which arm had been wounded. 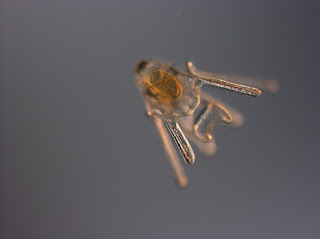 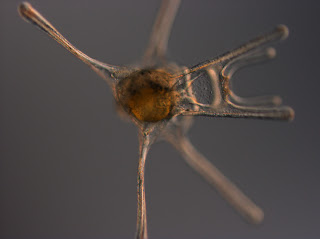 This is a photograph of one of the wounded sand dollar larvae. The arm on the left in the forefront of the picture is the arm that was wounded. As you can see, there is little difference in length between the wounded and unwounded arm pain at this point in healing.  The third set of arms are visible in the background (out of focus).

This is another of the healing larvae 12 days after wounding. It is not apparent in the picture which was the wounded limb, but I like the way this picture shows the three-dimensional structure of the larva.

After tracking the regrowth of the wounded limbs for about a week, I started working with the data to determine how the wounded arms regrew relative to the unwounded arm. I'm using Excel to process the pages of data I compiled.  When I'm not muddling my way through Excel, I've been working on fixing larvae and staining them with fluorescent antibodies. Fixing and staining the larvae prepares them for confocal microscopy. 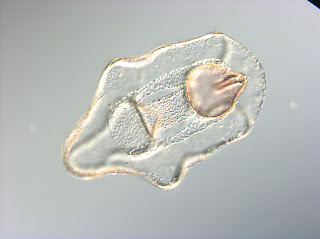 This is a photograph of a Patiria miniata (sea star) larva. This larva's pink stomach shows that it has been eating well. I am mostly working with Patiria larvae for the fluorescence experiments because the Dendrasters' skeletons don't hold up to the fixation process very well.

The Patiria larvae are "relaxed" in a magnesium chloride solution; the MgCl2 mitigates the effect of formaldehyde on muscle contraction. The relaxed larvae do not contort and deform as readily as un-relaxed larvae when treated with formaldehyde. After relaxing, larvae are left in formaldehyde for about an hour. After this is rinsed away, the larvae are stained in three main steps. The larvae are soaked in a "blocker" to minimize non-specific staining. That way, the binding sites on many proteins will be taken already and the antibodies we introduce won't be able to "stick" to as many proteins in the larvae. A primary antibody is introduced which will bind only to specific proteins. Then, a secondary antibody is introduced which will bind to the primary antibody. The secondary antibody is the one that will fluoresce when excited by laser light on the confocal microscope.

This coming week, I'll be fixing and staining a lot of larvae. We'll try a bunch of antibodies and test to see whether they work in echinoderms. Since the antibodies are developed in vertebrate mammals, there isn't any guarantee that they will label the proteins in which we are interested in the echinoderms. Next week, I'll tell you all about the confocal microscope and show you some really cool pictures from the fluorescence experiments.
Posted by Keira Roberts at 6:58 PM