I cannot believe there are only two weeks left of my internship at Hatfield. This week I was given the wonderful opportunity to help with the NOAA's "fish-cutting party".  This is a three-day event where volunteers learn how to dissect juvenile salmon and collect data for many different projects.  All of the salmon from this session were caught in either the Columbia River or in curface ocean trawls in the Pacific near the mouth of the Columbia. There were four different types of salmon species including Coho, Chinook, Sockeye, and Chum.  From each fish the volunteers would collect some or all of the following parts: stomach, intestines with pyloric cecae, tail fin clip, otoliths (fish ear bones), anterior and posterior kidneys, and copper tags that were implanted in the fish noses. We also checked the body cavity and air bladders for nematodes and other worm-like parasites. The hardest part for me was dissecting out the otoliths, which are tiny little bones located on either sides of the spine posterior to the eyes.  The otoliths sit in fluid-filled sacs and help the fish balance and orient itself.  These bones can be used for aging and studying the condition of the water at different stages in the fish's life. Some of the stomachs I dissected had very interesting prey items still inside of them, including other small fish and even squid heads.  The stomachs, intestines, and kidneys will be used by Dr. Kym Jacobson to check for parasites and the stomach contents will also be used to conduct a dietary study for the juvenile salmon. The pieces of fin were taken for genetics studies and each dissected part was labeled with the fish ID number so the results could be correlated with the weight, length, and type of fish it came from, along with where the fish was collected. I was very excited to be a part of this process and it was very impressive seeing how efficiently everyone worked together to accomplish this goal. 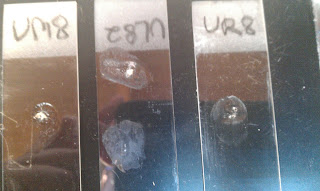 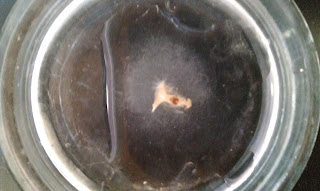 This week I also looked at some of the slides I prepared from the lateral teeth of the gastric mills of mud and ghost shrimp (Neotrypaea californiensis shown below).  I was not able to find any ring-like structures or evidence of annual growth patterns so I did some further research and discovered that age rings were found in the ossicles of the gastric mills of larger crustaceans.  Ossicles hard structures (less hard than the lateral teeth) that make up the walls of the gastric mill and hold the lateral and median teeth (pictured above in a petri dish and then embedded in resin) in place.  I dissected some of these ossicles out of my remaining mud shrimp and discovered that there were some ring-like structures in a section of the pyloric ossicle that I polished.  I spent the rest of the week mounting a camera on a compound scope and photographing these images.  I hope to take some measurements and mount more slides with this same part from other shrimp to see how the ring number relates to the size of the shrimp. Overall it was a very promising discovery and I hope to learn more in the next couple of weeks! 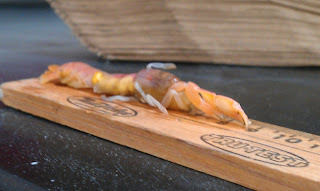 Posted by Natalie Coleman at 1:55 AM