My name is Leyia Johnson. I have recently graduated from Bellevue College with my second Associate Degree. This most recent degree is an Associate of Science (AS): Track II: Physics, Atmospheric Sciences and Engineering (Physical Sciences).

(For those of you that are curious, my first degree was also earned at Bellevue College in the spring of 2009 through the Running Start program. The Running Start program allows students in grades eleven and twelve to attend courses at Washington state colleges in lieu of high school. Therefore, I earned my high school diploma and my Associate in Arts & Sciences – Direct Transfer Agreement (AAS-DTA) simultaneously at the conclusion of my grade twelve year.)

This autumn, I will be attending the University of Washington Seattle as an Oceanography major. I intend to be a double major in Physical Oceanography and Biochemistry with a minor in Quantitative Science. I am thrilled to be a part of the program that sparked my interest in pursuing marine science.

This spark occurred several years ago in Washington DC while exploring in the Smithsonian. At the National Museum of Natural History, there is an exhibit on hydrothermal vents. Hydrothermal vents are springs of hot, mineral- and gas-rich seawater found on some oceanic ridges in zones of active seafloor spreading. I was fascinated by the communities of life found at the bottom of the ocean that relied not on photosynthesis, but chemosynthesis. Chemosynthesis is the synthesis of organic compounds from inorganic compounds using energy stored in inorganic substances. The exhibit sign referenced research done through the School of Oceanography at the University of Washington Seattle. The intrigue of this program lead to my decision to leave the Faculty of Arts at the University of British Columbia Vancouver and pursue an education in marine science, starting at Bellevue College.

At Bellevue College, I took Introduction to Oceanography with Marina Halverson. It was through her that I learned about Centers for Ocean Sciences Education Excellence – Pacific Partnerships (COSEE-Pacific Partnerships) “Promoting Research Investigations in the Marine Environment” (PRIME) funded by the National Science Foundation. I am excited for the opportunity to work in research. I love learning and now have the glorious opportunity to participate in the discovery.

It is only the first week and I have learned so much already!

My mentor is Dr. Alan Shanks at the Oregon Institute of Marine Biology (OIMB), University of Oregon. So far he has been wonderful in introducing us, (my fellow intern in the Shanks lab is Peter Sheesley), to the research environment and process. The first day Alan gave us several academic articles he authored to read. These articles lead us through years of his past research.

It was widely believed that the larvae of intertidal invertebrates (animals lacking backbones) were swept offshore during upwelling and back to shore during downwelling. Upwelling is a circulation pattern in which deep, cold water moves toward the surface and downwelling is a circulation pattern in which surface water moves vertically downward. A study Alan L. Shanks and R. Kipp Shearman conducted provided evidence against this hypothesis. They found that upwelling and downwelling had no effect on the cross-shelf distribution of the larvae of intertidal invertebrates. This lead to further research on what did have an effect on their distribution.

The Shanks lab has been linking the dispersal and recruitment of the larvae to nearshore physical oceanographic features.

Thus far, I have learned how to cast a well bailer cast (a clear, plastic cylindrical tube) and retrieve a water sample from it. I have retrieved both a phytoplankton (tiny photosynthetic organisms that are suspended in the ocean) sample and a zooplankton (animal members of the plankton community) sample from a plankton net (a conical net made of fine mesh) and identified organisms in both samples. I am told that we will be counting Pseudo-nitzschia. Pseudo-nitzschia is a genus of diatom that produces a neurotoxin that causes humans to permanently lose short-term memory. 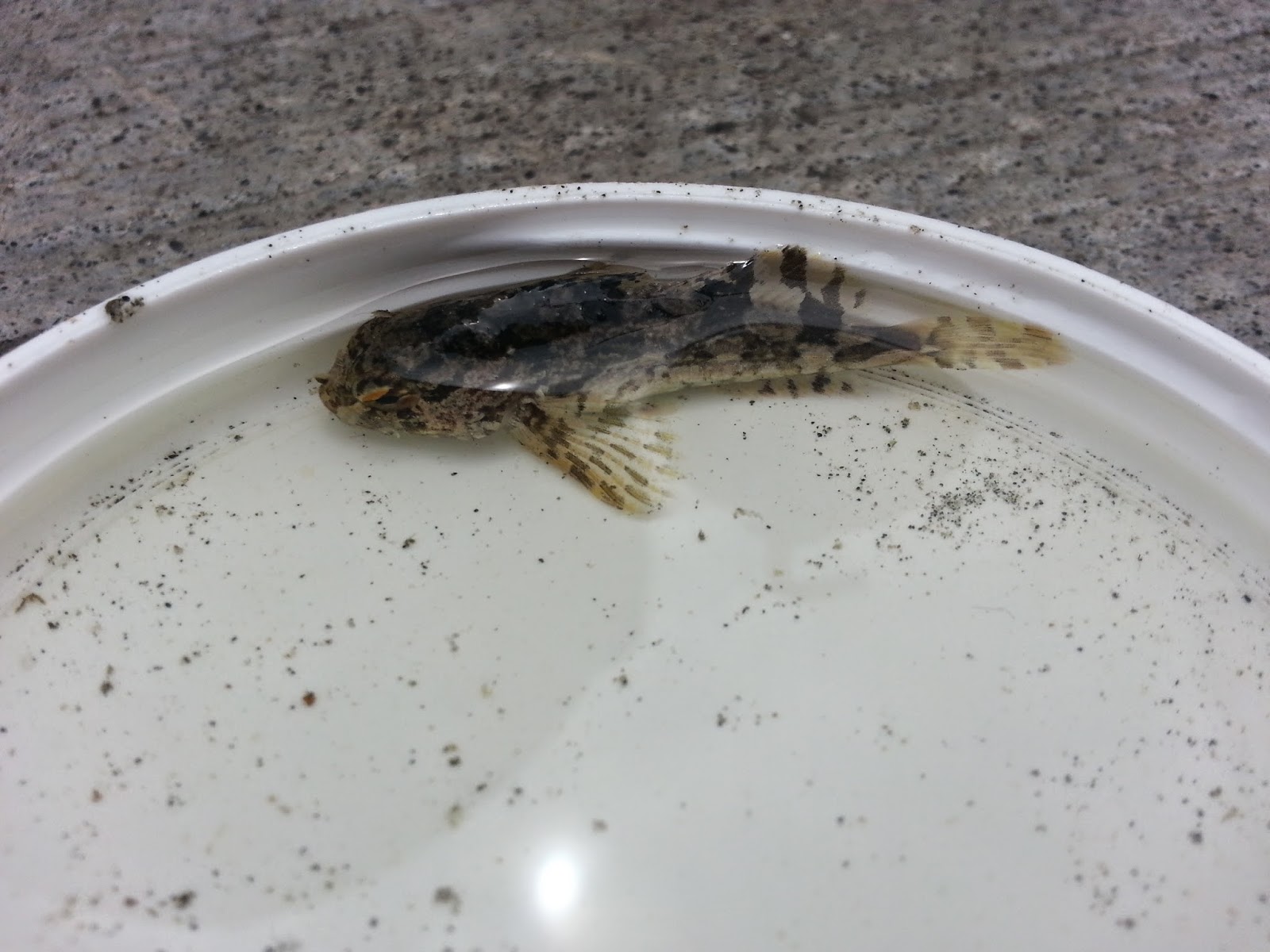 We have also emptied a light trap. The light trap is a large plastic bottle with holes in the sides and a light inside in order to attract crab. It mainly catches crab, but everything caught is documented. When we emptied the trap we found a fish! Alan informed us that it was a cabezon (a type of sculpin) and that they can grow to be enormous, (twenty-five pounds according to Wikipedia). The tiny cabezon we caught is our pet now. It lives in the lab in the sea table. 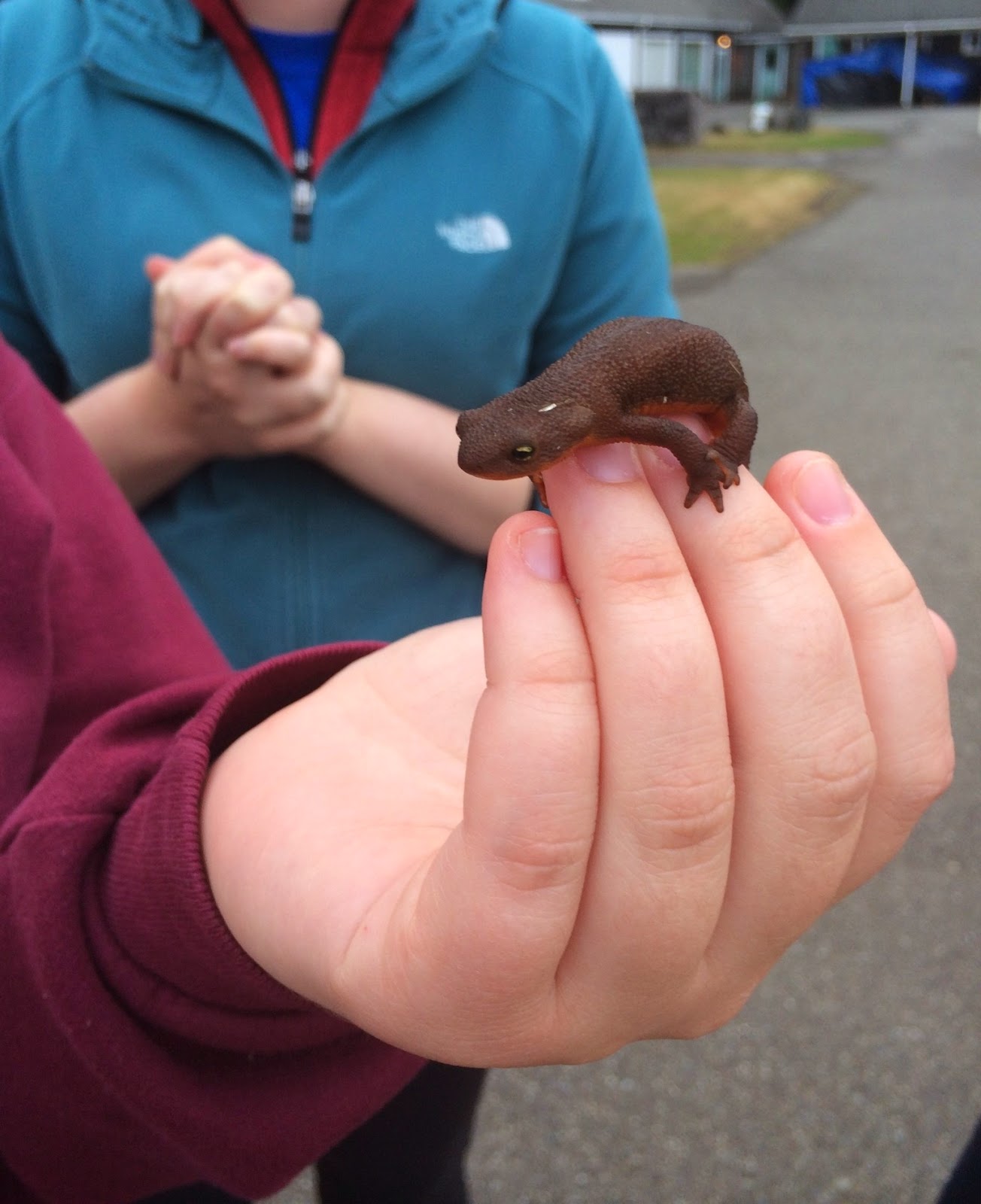 Unrelated to our project: Near our dorms we also found a newt, but we returned it to the creek nearby. I named it Newt Scamander for exploring the beasts to be found outside the creek.
Be sure to check back next week for another update on my activities here at OIMB!
Posted by Leyia Johnson at 5:12 PM