Hey everybody! Sorry for the delay on the blogs! I will briefly talk about week 3, but I'd like to focus my discussion on what I have been doing for the past week or so.
During week 3, I continued monitoring the colony of birds in Deope Bay. It was important to do follow up data collection beyond the day after the fireworks because often times abandonment, and predation of the nests can take take place up to several days after a disturbance. From what my data shows it seems that the birds were fine...no long term disturbance and no abandonment of nests. to the right is a picture of a Brant's Comorant, the bird that this study mainly focused on. One of my favorite features of Brant's comorants is the bright blue colored patch that they have on their throats. Only the sexually mature adults have this blue patch while the juveniles have a tan patch or no patch at all.

For the past week and a half I have not been surveying the Depoe Bay colony... Instead, I have had the opportunity to participate in a few other really awesome experiences. For part of the time, I have helped other biologist who are surveying colonies of Common Murres out at the Yaquina Head in north Newport. The main study that I have bee 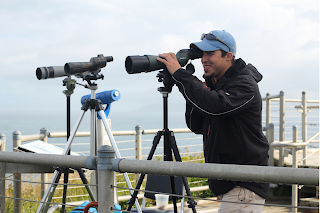 n a part of out there is determining the frequency and type of feeding that the Murre chicks receive from their parents. We also have been keeping track of the predation events on the Murres that the local Bald Eagles have been instigating. In a 6 hour monitoring shift I witnessed three times when a Bald Eagle attacked the colony, and made off with either an adult or chick Murre.
The picture on the right shows me surveying the Murres on Flat Top Rock at the Yaqunia head location with a Swarovski spotting scope. Something that I was astonished by was how physically packed the Murres were on the rock....They are practically nesting/roosting shoulder to shoulder in these colonies. The picture below shows a both how tightly packed the Murres can get on the rock and a Bald Eagles predation attempt! 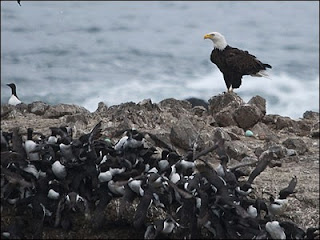 The other awesome experience that I really enjoyed was when I got to go down to OIMB with Itchung and Drew to go visit the other COSEE interns and Staff. I was fascinated by the research that the interns down there were conducting! I was very impressed with the respect and quality of work that their mentors gave them. I also enjoyed the presentation that a speaker gave on the parasites of Hermit crabs....sooo much detail....and sooo much interesting information that I never knew!!!
Posted by Coty Krebs at 10:43 PM