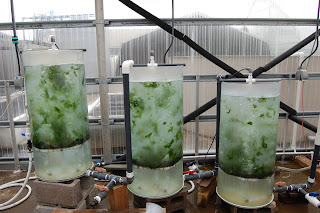 Busy busy busy. I have finally gotten the chance to sit down and write another post. I have a lot of new info and exciting experiments that I have done. I devised the bio filter and have gotten a lot of data form it. I took three 200 liter tanks and created a flow through system where the water goes in from the top and out from the bottom. I built an aeration system and plumbed a seawater line, an air line and a freshwater line for cleanup. I've never done any plumbing before so this was a great new experience.

After the initial set up I ran the tanks without the Ulva for five days to get baseline water quality measurements to determine how much was being done by the heavy aeration and how much was being done by the presence of the Ulva. I decided to use PH measurements as my indicator for the amount of dissolved CO2 being removed(this will be tested later to determine whether this is an accurate indicator) . As it turns out the heavy aeration itself seemed to stabilize and slightly raise the PH. The incoming water was fluctuating between 7.50 and 7.85 while the water coming out of the system was only fluctuating between 7.90 and 8.00. I also tested other parameters such as; flow rate of water, flow rate of air, alkalinity, temperature, salinity, time of day, date, and dissolved O2. I focused mainly on PH, time of day, date, and temperature.

I then settled on a way to standardize the amount of Ulva that was placed into each tank. I took an ordinary salad spinner and decided on ten spins as my mode of getting consistent dryness so I could get an accurate weight of the algae and not the variation in wetness. I stocked each tank with 0.200 kilograms of the Ulva that had been dried in this way. The picture of the system shows the tanks at this stocking density. I took water samples from the water going into the system and from the water going out of it. I will write about those results in a future post.
~ Dave
Posted by Dave Hubert at 8:37 AM