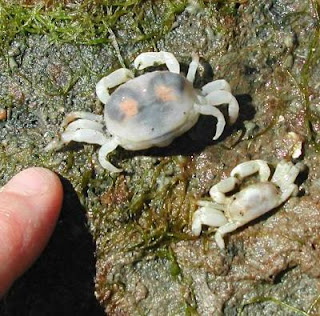 In the field, Mitch has introduced me to a number of species that inhabit Idaho Flat. Once or twice during our diggings, I've been surprised to find a little crab escaping from the gaper's shell as I pulled the clam from its burrow. The pea crab (Pinnixa sp., photo obtained via google search from beachwatchers.wsu.edu) establishes a commensal (one species benefits with little or no harm to the other) relationship with gapers by using their shells for shelter. Adult females become too large to leave the shell, and feed by scraping plankton from a fringe of tissue attached to the clam's visceral mass. This fringe is called a visceral skirt. Adult male pea crabs are much smaller, have a tougher upper portion of their exoskeletons (carapace) and can move from clam to clam. Though several pea crabs may inhabit a gaper clam's shell simultaneously, no more than a heterosexual pair of adults will reside in one gaper at the same time. The common name "pea crab" is used to describe members of Family Pinnotheridae that have commensal or parasitic relationships with bivalves and other marine species. The three species of pea crab that favor gaper clams are Pinnixa faba, P. littoralis and Fabia subquadrata.