On Friday, 7/9/10, I set up an informal juvenile Tresus capax reburial trial. Most of the specimens used during this test were confiscated from an overenthusiastic clam-digger by an Oregon Department of Fish and Wildlife employee . To view 2010 Oregon shellfish regulations, visit http://www.dfw.state.or.us/MRP/shellfish/regulations.asp. 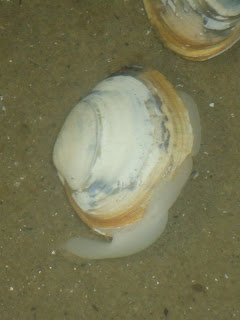 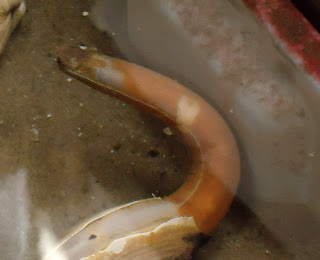 All the specimens sat still after I placed them in the tank for varying amounts of time. A specimen usually began reburial by extending its neck (left photo, see the leathery plates?) and perhaps waving it from side to side. The specimen pictured on the left changed its orientation and location by using its neck and foot in tandem. The first specimen to attempt reburial extended its foot and inserted it into the sand using undulating motions (right photo). Whether a specimen dug straight down or at an angle to the surface, it facilitated the process by pushing jets of seawater down below its foot to liquify the sand (see video).


A clam changes the shape of its foot using a hydrostatic (fluid) skeleton to change the foot's internal pressure, longitudinal muscles to change foot's length, and circular muscles to change foot's diameter. As I was preparing to film this video, I observed how tightly gapers can cling when I pulled one clam's foot free of another clam's shell. It reminded me of pulling a snail off a rock! If I find time next week, I want to test for mucus by placing one of the gaper clams on glass.
Posted by Samuel Moore at 3:53 PM