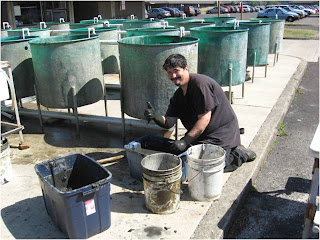 I measured the changes in each clam's burrow depth for 1-2 weeks. The data suggests that there is a moderately negative association between shell length and average burrowing rate. In other words, the larger clams tended to dig slower than the smaller clams, but there was no evidence of a cause-effect relationship. 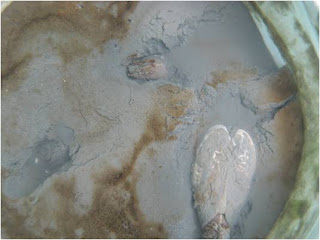 After softening the mud, we collected and tagged more clams to use in our final experiment I divided the clams into 3 size classes based on their shell length and let them acclimate overnight. The next morning, I placed 29 clams in the buckets and let them go at it for 24 hours before photoing them and giving them a score from 1 (no evidence of burrowing) to 5 (shell completely below surface). The results show that the largest class had a wide range of scores, and nearly all of the smallest class rated 5, but a cracked one only got a 2. It was clearly unable to stand up and squirt water below its foot, and died a few days later. The fragility of the young clams' shells may be one reason ODFW wants us to keep them if we catch them.