I've been wounding  D.excentricus larva by using a laser to remove one of their arms.

I fixed the healing Dendrasters 1 and 3 days after wounding. I stained them with the phosphohistone antibody (discussed in an earlier post) in order to determine areas of cell proliferation. Were the cells at the tip of the wounded arm dividing rapidly in order to regain the missing length? If that were the case, then we would see a density of dividing cells  in the tip of the wounded arm. 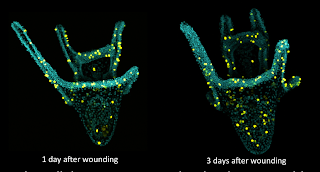 I did a similar experiment with the P.miniata larva. I had been bisecting them: 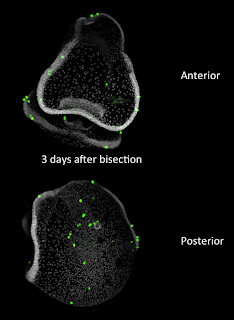 In the larvae fixed 3 days after bisection, we see cell division spread throughout the larval body. There is some preferential division in the ciliary band of the anterior half, but certainly no noticeable density of division at the wound site (the line of bisection). 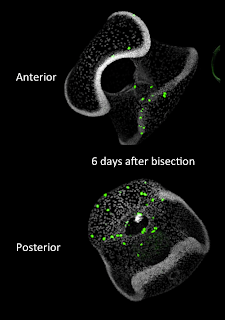 Since the repair that the bisected P.miniata must do is so much greater that the repair required by the D.excentricus arm regrowth, it seems that P.miniata larvae must focus cell divisions at the wound site, while D.excentricus larvae can regrow the arm as a part of their continuing normal growth.
Posted by Keira Roberts at 12:06 PM