Last few weeks in the field

The last few weeks provided us with some great conditions for field work, followed by this final week of dense fog allowing us to spend time in doors organizing and studying the data.  A few of our days out in the field we were lucky to get close to some of the resident gray whales that feed along the rocky shoreline outside of Sunset Bay.  I was surprised to see the whales so close to the rocks, with a few we saw appearing to be right up against some very shallow outcroppings, as if they were scratching their sides on the rocks!  I was told later that they were feeding on mysid shrimp found in the kelp beds, a behavior that the resident whales have adapted to the local habitat.
We were able to get three days of field work in the week of the 25th along with a set of plankton samples on a day the front was clearly present at Sunset Bay.  It will be exciting to see how are samples differ from each other.  Samples were taken shoreward of the foam line at three different depths including the surface, offshore of the foamline at the same depths, and within the foamline  at the surface.   Up until now I wasn’t  sure of what the cause of the foam along the front was but was surprised when told that it is due to the release of lipids from certain plankton when they breakdown.  The break down of these organisms can actually be caused by the forces created at the front between the two water masses and also along the rocks where wave disturbance causes a lot of breakdown, producing large amounts of foam. 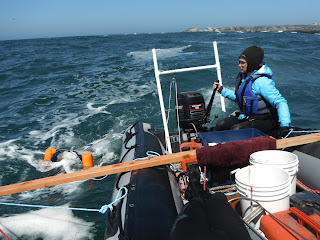 On the week of the 6th winds had shifted to the south for a few days, giving us the chance to do some field work during downwelling favorable winds.  We were surprised to see that a foamline was still present and it was the first time that our drogues at 5.5 meters depth both traveled offshore, with the inshore drogues crossing the foam line. 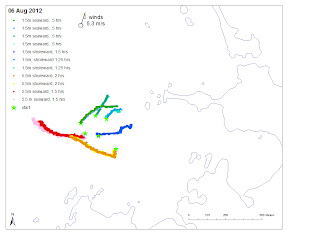