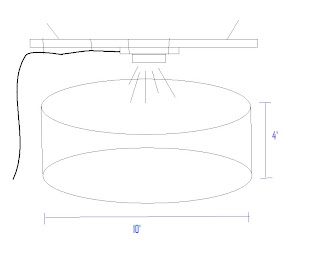 This is the large tank system.

This tank was storing the Ulva but was not getting a desirable growth rate. The basic setup is a round tank that is 4 feet tall and 10 feet across, with an inverted lawn sprinkler suspended above the tank to keep the Ulva from drying out. The drain is on the bottom of the tank and enables the water level to be adjusted by raising or lowering the exit point. This is where I would take my samples to test. 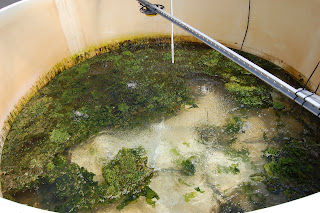 When I took over this tank the water depth was about 7 inches, the single sprinkler was reaching about half of the surface of the water, there was a ring with light aeration around the edge of the tank, and the bottom was filled with various types of debris intended to be an anchor for the Ulva to grow on.


The first thing I did was raise the water level to about 16 inches, I removed all of the debris and I increased the amount of aeration. This resulted in an increase in the growth but still not what we were looking for. 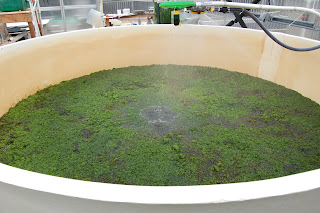 The next set of adjustments I made was to raise the water level to about 23 inches. I tripled the water flow, added a second sprinkler resulting in full coverage of the surface of the water. I removed all of the aeration from the tank, creating a calmer surface allowing the Ulva to spread, and I placed a small submersible pump into the tank to create some movement under the water. This combination seemed to do the trick and resulted in approximately 95% coverage within a few days.