After a month of sampling and “bombing” my samples I learned how to input all of the data collected into excel so we could calculate out the energetic content in joules. A joule is a measurement of heat, as are calories. Because smooth bay shrimp (Lissocrangon stylirostris) were so easy to catch in our samplings we had a lot of data collected on them. We were finding three categories of smooth bay shrimp, we would find ones that were brooding (had eggs), some that had been parasitized, and what I inaccurately called “regular” meaning they were neither brooding nor parasitized. From the beginning we separated out all the shrimp we caught from seining into the three categories and I bombed them accordingly. I started to notice some trends once I had calculated out their energetic content. The brooding shrimp had a higher caloric value than the other two shrimp categories. This was not a surprise because eggs naturally have more energy, and supply more nutrition. However what I found interesting was that the shrimp with parasites seemed to have the same caloric content (aka energetic content) as the shrimp that were deemed regular. Why this was so surprising to me was because the shrimp that had parasites were around the same large size as the shrimp that were brooding. The regular shrimp were small in size so that might have had an effect of their caloric content as well. So I started to research the relationship between the parasite (Argeia pugettensis) and it’s host the smooth bay shrimp. What I had discovered by reading some science journals that Jose (my mentor) had recommended to me was that there wasn’t a lot known about the shrimp and the relationship between the parasites.
Jose had asked me earlier if there was anything I wanted to research independently, well I had found my topic. How are the parasites effecting the shrimp? Because I have been working so much with the Bomb Calorimeter I formed my question to ask: “Are the shrimp effecting the caloric content of the shrimp?” I hypothesized that if I were to remove the parasites from the shrimp I would find that the shrimp would have a lower caloric content.


Dr. Jessica Miller, Jose and I came up with an experiment design on how I would go about asking this question. We decided to have a total of 30 shrimp that I would bomb, and collect 15 from each of our two sampling locations. So 15 shrimp from Alsea Bay and 15 Shrimp from Coos Bay. Within the 15 I would collect from each site I would have 5 brooding shrimp, 5 parasitized shrimp, and 5 “regular” shrimp. So that’s what we did! I removed all of the eggs and parasites off the shrimp so I would put them back to their “regular” state. 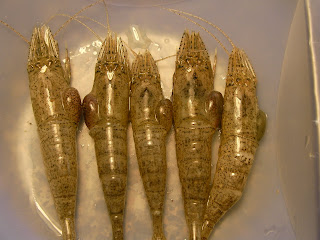 (This is what the shrimp infected with parasites look like, the one on the very right had a parasite missing, I think it may have fallen off when we caught the shrimp). The parasite live on the gills under the shrimp just under the exoskeletons. 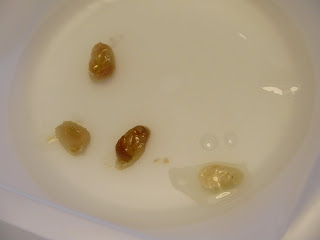 (This is what the parasite looks like after being removed from the shrimp). 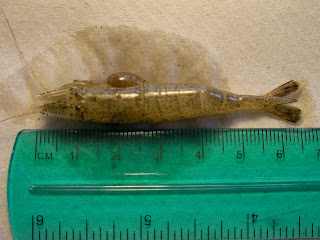 (this shrimp is around 5.5cm long, the point of this picture is to show just how big the parasites are compared to the size of the shimp).
After entering and graphing the data, I found that parasites do not seem to effect the caloric content of the shrimp. This isn’t the result I expected, but it was still a surprising discovery!
Posted by Laury Perry at 4:55 PM