My name is Natalie Coleman and last term I finished my Associate of Science Degree at Portland Community College. I will be transferring to Oregon State University in the fall to complete my B.S. in Zoology with a Marine Biology minor. I was drawn to the PRIME program because research is a very important aspect of my career goals and obtaining research experience is very difficult without university connections.  The COSEE PRIME program offers an opportunity I would otherwise not have had.  I grew up in the San Francisco Bay Area in California and have been interested in marine science since I first went tide-pooling at the age of four.  My ultimate career goal is to work toward the conservation of marine life, especially mammals and sharks.

This summer I am working with Dr. Brett Dumbauld, a scientist working with the US Department of Agriculture, who is researching the effect of two species of burrowing shrimp on the oyster aquaculture in the Pacific Northwest.  The way in which these shrimp, Upogebia pugettensis and Neotrypaea californiensis, burrow causes the substrate—the mudflats where the oysters and shrimp live—to collapse or make it impossible for the juvenile oysters to settle and grow.  I will also be working with Dr. Dumbauld’s PhD student Katelyn Bosley to help build an age structure of Upogebia puttegensis. The population model she is creating will help scientists better understand how to help the oyster aquaculture without significantly damaging the shrimp population.  Currently Katelyn is using lipofuscin—a brain pigment which accumulates with age—to determine the age of the shrimp collected.  This summer I will try a new technique which utilizes the calcified eye stalks to age these shrimp.  The eye stalks have been found to contain annual rings, much like tree rings, in crabs and lobsters but I will be the first to try this technique on Upogebia and Neotrypaea shrimp. 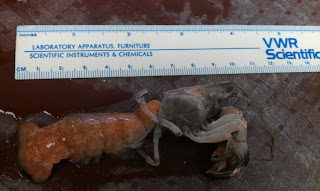 This week I have already gone into the field at the Yaquina Bay estuary with Dr. Dumbauld to sample the smaller shrimp who are just returning to the mudflats from their pelagic—open ocean—lifestyle. These “recruits” help determine the condition of the populations of different estuaries. The next task was to measure the carapace—the shell covering the top of the shrimp head—and total length of these shrimp and preserve them in alcohol for further study.  I was able to analyze all of the recruits from Yaquina Bay and found nine, whereas the samples from Willapa Bay in Washington and Tillamook Bay in Oregon contained no recruits. The next field assignment was to take larger samples from the mudflats to retrieve larger shrimp.  I also measured the carapace and total length for these shrimp, but in addition I recorded the sex of each shrimp and whether or not they contained a parasitic isopod—a blood sucking invertebrate that latches onto their gills.  Though these parasites do not kill their host shrimp they make it impossible for the females to produce eggs because they lack energy, which reduces the population of Upogebia. Dr. John Chapman is working with Dr. Dumbauld to investigate the effects of this parasite on the shrimp populations.  Their research revealed that this parasite is an introduced—non-native—species from Japan. 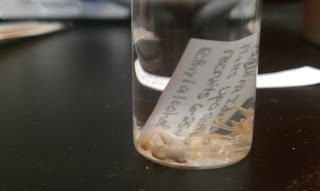 My first week was extremely messy, fun, and informative. I cannot wait to see what next week will entail.