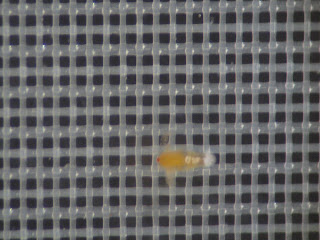 Those of you who have viewed my recent posts know that I've been struggling to keep track of my tiny zoo-plankton research subjects. I place them in the turbulence generator (see pic below) where they enjoy a leisurely two-hour swim and when I remove them there is invariably a smaller number that come out than went in! Sometimes the difference is small (~5%) and sometimes it's not so small (~50%!). This last week I began to work methodically at isolating the source of their mysterious disappearing act. To do this I have become an experimental detective of sorts and I'm satisfied to report that I have some very strong leads in this case!

My detective work has partially consisted of breaking up the larger experiment into smaller pieces and doing counts of plankton before and after. There are many places in the experimental process where the plankton (Artemia salaria) could go missing and since they're so small (~.5 mm long x .2 mm wide) you can't just peer around with a flashlight for them!

One of the first things I decided to look into was whether or not the A. salaria  could squeeze though the mesh screen partitions in the turbulence generator. The mesh has holes that are only 100 µm wide (.1 mm). I assumed that the A. salina larvae, while small, were at least a few times larger than this. However, when I peered through a dissecting scope at A. salina placed directly on top of the mesh (see photo above), I realized that the width of the A. salina perhaps only two times larger than the mesh holes and perhaps not even that. This might not seem like a cause for worry by itself, but when the turbulence pumps are on they create a suction effect through the screens, which may be all that is needed for this soft-bodied prey to pass over to the other side of the screen partitions. When I ran my first experiment, I recovered 80 out of 100 A. salina: disappointing, yet a pretty average outcome thus far. Since I originally only rinsed out the central chamber where the A. salina  were placed, I decided to rinse the pump chambers and siphon out the water from there. To my relief, I didn't find a single sea monkey! ("Sea monkey" is the common name for A. salina.) I decided to let the 100 um screens off the hook, at least for the moment.

After running a second full turbulence experiment I had result consistent with the first: 77 out of 100 A. salaria recovered from the tank. I realized when I was counting them under the dissecting scope that some of them were rather mangled; sometimes this meant they lost a lot of tissue and sometimes I would just find a loose head of one of the poor buggers! I realized that if some of them were in this marginally recognizable state, then perhaps some had gone past it, disintegrating into a mess of unfamiliar fragments.

I realized that the siphoning process is the roughest obstacle in the A. salarias' course, so I did some little tests. I placed 40 A. salaria in 2 liters of water and siphoned them through a 43 um filter to concentrate them. After doing this twice my results suggested that I found the source of the missing A. salina: I only recovered 33 and 36 out of the 40.

I squeezed in a third and final trial run last week and decided that i would siphon out the water (and A. salaria) as gently as possible, so as to prevent the mangling. The results were very promising: I recovered 99 out of 100! (Although, one was very mangled and two were partial.) The main trick was to slow down the flow speed of the siphon. This was accomplished by using a skinnier hose (~3/8") and by using a much smaller height difference between the ends of the siphon hose. I going to run the same experiment a few times this week and hopefully get the same results. Then I'll add some copepods to the mix and see if they are recovered as easily. I'll be sure to let you know how it turns out. In the meantime, go easy on your plankton!