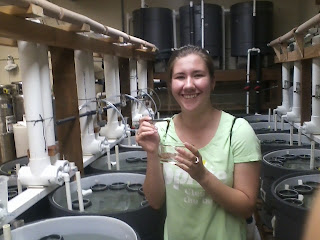 This week at Hatfield, Ella and I continued to help Matt Yergey and Waldo Wakefield with their historical data cataloging. This data contains information on what was caught on the research vessel from 1977 to 1979. It includes the fish caught, what they were, and how long they were in millimeters. By entering this long-term data set into an online database we are able to preserve this historical data that at the moment is solely composed of handwritten notes. Also, once the data is properly stored in the database it can be compared statistically with current population data that Matt and Dr. Waldo have been collecting for the past couple years. 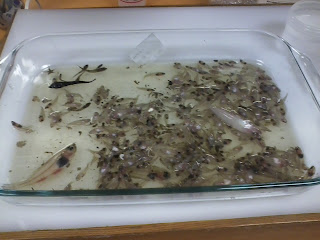 This week we were also able to get some time out of the office. We went to the lab with Matt to help identify, measure, and preserve some fish from part of last year's catch. The picture above shows one of the sample bags after it has been thawed. Below, a fish identified as a Slender Sole (Lyopsetta exilis) is being measured. After it is measured it will be patted dry, weighed, and preserved in formalin, which is a chemical derived from formaldehyde, that is used to preserve flesh. 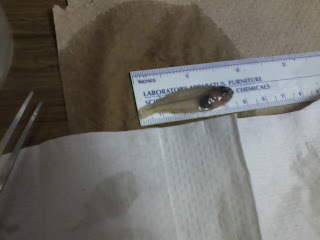 ﻿
The photo at the very top is of me helping a graduate student, Morgan Bancroft, with his project. He is studying live juvenile Dungeness crab and English Sole in artificially-made hypoxic environments in the lab. Ella and I were able to help Mo by feeding the juvenile crabs. It was so much fun because the hungry ones will take the food right off of the forceps. They are very cute, and it was nice to deal with some live animals after being in the lab with dead fish. Over all this week I learned a lot and was able to get some real research experience!
Posted by Unknown at 5:13 PM