I started this week at HMSC at dawn on Monday morning when I went out onto the mudflats at Sally’s bend on the Northwest side of the Yaquina estuary with Dr. Brett Dumbauld and one of his graduate students, Daniel Sund.   Our mission was to assess the populations of Dungeness crabs (Metacarcinus magister)  in two different species of sea grass beds, Zostera japonica and Zostera marina.  It has been suggested that the invasive species of sea grass, Z. Japonica arrived in the estuaries of the Pacific Northwest in oyster seedling shipments from Japan.  This project focuses on the crabs’ ability to utilize the invasive sea grass as habitat as well as the native sea grass.  To test this theory the team placed shell bags out in the estuary at different distances from the shore, corresponding to Z. marina beds and Z. japonica beds.  These shell bags were meant to attract crabs in the area so they could be counted and measured.  The substrate in this area was very soft and difficult to work through, with all three of us getting stuck waist-deep in mud at some point, but we succeeded in counting and collecting all of the crabs and sea grass samples.  Interestingly, we ended up finding more shore crabs, Hemigrabsus oregonensis, which feed on larval Dungeness crabs, than we expected. 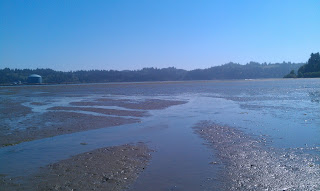 My next project was to use a TRIMBLE GPS system to navigate to over 260 points located around the Idaho flats region of the estuary.  At these points I would use a 0.25 meter square called a transect and place it on the mudflat to count the number of shrimp burrows.  I then flipped the transect to the left or right and counted again, to get two counts for each data point. I also recorded the density and type of algae present and the type of substrate (i.e. mud, sand, etc.) I did this for 160 of ghost shrimp coordinates and 100 points for mud shrimp. This data will be used by Katelyn Bosley to build a population estimate of burrowing shrimp around Yaquina Bay. 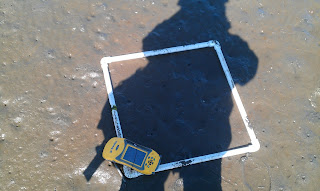 At the end of the day I was also able to volunteer in Morgan Bancroft’s lab and help feed his baby Dungeness crabs frozen krill.  He is studying the effects of hypoxia—low oxygen levels—on the growth of Dungeness crabs and English Sole flatfish. 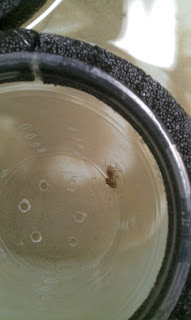 All in all it was another exciting week at Hatfield.  Next week I hope to start dissections on the foreguts of mud and ghost shrimp for my aging analysis. 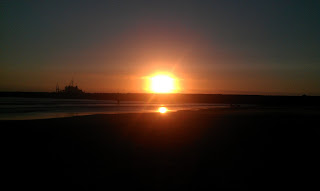 Pictured at top are a photo of Idaho flats and the transect and GPS device
Below you can the Dungeness babies and the sun setting over Yaquina Bay!
Posted by Natalie Coleman at 9:52 PM