The weeks have been going by so quickly, that it is surprising and a little alarming to be looking at presenting our projects in two short weeks. We have started thinking about those presentations by reflecting on the Hawaii interns’s presentations.

A big highlight of this week was helping out with NOAA'S fish cutting party, as mentioned earlier in last week's blog. Never having gutted a fish, I went through a big learning curve with the Chinook, Coho and Steelhead, and now can cleanly and efficiently dissect juvenile salmon.
Mardi Gras beads were given out to those who discovered parasites in the body cavity or swim bladders of the fish as a prize to keep things lively at the party. We took out and labeled separately, the stomachs, intestines, and posterior and anterior kidneys (the latter of which house the trematodes from last week’s blog). A tail clipping was taken for genetics testings. The most exciting and hardest part was extracting the otoliths, or ear bones. The otolith are tiny little bones buried just under the brain of the fish, and a certain amount of technique is needed to locate them. The otoliths are used to roughly age the fish, as a ring is added to the little plate of bone every day that the fish has been in saline water. Scientists then use this information  to determine the exact day that the went out to sea, similar to growth rings on a tree.

Another big highlight was being able to help out with July’s data collection with Waldo’s beam trawl. We chartered a shrimping vessel, The F/V Miss Yvonne, and headed out to sea, mostly sampling along the Newport hydrographic line which which runs directly perpendicular to Yaquina head. This was such an exciting opportunity, as the sampling that Waldo does currently reflects the methods that were used in collecting the similar data from the 1970’s, which Katlyn and I are now working on entering. In fact one of the main objectives of entering our data set is to be able to make comparisons between the two data sets on juvenile flatfishes. It was wonderful to be able to see how the beam trawls work, and how information was recorded, as both Katlyn and I are now so familiar with the type of information that went along with each cruise.  Our methods were as follows: at each station, we would record the latitude and longitude and the wheel count on our beam trawl. As the beam trawl was drug behind the boat, a counter on the wheel kept track of the meters we covered, an effective way of knowing the exact ground distance covered. 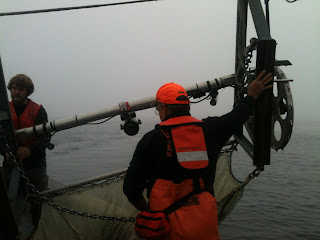 We caught many other exciting things besides our juvenile flatfish that we were after. We only kept fish that were under 150 mm in length, and tossed the rest of it back. Most hauls saw many shrimp, while Dungeness crab, sea nettles and sea stars frequently came up as well. Following are pictures of some of the neat organisms we encountered:

We sorted the very small flattish from the krill using forceps, a task that could have made us very sea sick, but that was actually very easy to do, thanks to the flawlessly calm water that day.


Although I did not get the chance to blog about it in my post last week, I was able to volunteer for a NOAA mitigation project, counting eelgrass beds in a newly created mudflat in Yaquina bay. The project came about because of a new dock that NOAA has built in the bay which has disturbed vital eelgrass habitat. In order to mitigate this impact, part of the bank was dug out to create a level surface, and eelgrass was transplanted from where the edge of the bay used to be in this new area which now floods with the high tide and harbors many different species of marine life.The objective of the morning was to investigate how well the compensatory eelgrass was growing.We used small square made of pvc to measure the number of eelgrass plants in our squares at regular intervals. It was great to be a part if the counting effort, as it offered an excellent opportunity to reflect on how science is done. There were obviously obstacles that we encountered such as a rising tide, which interfered with our methods when it came earlier than expected.
Posted by ellamarie at 9:59 AM