After having completed all four research cruises in Bellingham Bay, I have been able to create various maps to track the bottom dissolved oxygen concentrations in the bay as well as look at the side view of the transects we performed to identify where the hypoxic layer was located. These maps showed that the hypoxic water layer was much more mobile than we initially thought it to be. Going into this project, I had assumed that the hypoxic area we found would be located at the bottom of the bay and would remain there from week to week. Instead, it traveled up and down the water column and was never in a consistent site. This indicates that tides and currents may be another factor to consider when looking at the hypoxic zone of water in Bellingham Bay. 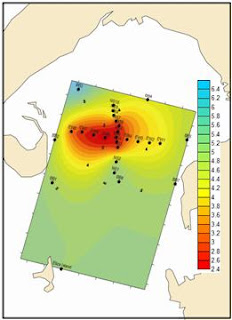 This graph of the bottom water dissolved oxygen concentrations in Bellingham Bay is from the first week of testing. This was the week when the hypoxia was the most severe and extensive. After creating this map, I used it to calculate the volume of the hypoxic zone so I could find a comparable value. I calculated that the hypoxic zone had a total volume of 3.6 billion cubic meters, which is roughly equivalent to the volume of 35 Metrodomes (the Minnesota Viking football stadium). This value will be useful to have in the future to compare the sizes of hypoxic zones to examine trends as to whether the hypoxia is becoming more extensive.

I also worked on comparing Hood Canal to Bellingham Bay from July 2007 to February 2011 to see if there were any correlations between the two hypoxic systems. There were not any

significant correlations between the two bodies of water; however, they did follow some of the same annual trends and patterns. One of the most interesting similarities that was noted between the two bodies of water was a salt water wedge that came over a sill, which is a feature that both of the systems have. As deep marine water that has a high salinity, low temperature, and high density is pushed over the sill, it forces the hypoxic water at the bottom to move upwards in the water column. As the water is pushed up, it can move into more shallow areas, where fish may become trapped in the hypoxia and cause a fish kill. This process is shown in the figure.

Overall, the research that I have worked on this summer has helped identify some of the patterns that hypoxia in Bellingham Bay follows. However, it also raised many more questions about causes and influences, duration, location, and behaviors of hypoxia in the bay that require additional research.

I would like to thank my advisor Dr. Apple for taking me in this summer for this research project. I have enjoyed my time here and appreciate all of the help and guidance you have provided throughout the summer. Hopefully I will get the opportunity to continue this research with you in the future!