It has been a while since I last updated all of you, and I have quite a bit to catch up on. I have been working hard on collecting my data, both during cruises in Bellingham Bay and the San Juan Channel, as well as spending time on the weekends doing outreach with SPMC. In order to cover as much as possible, I will focus each of my upcoming blogs on a separate aspect of my work these past few weeks. This outreach has been a way for everyone here to help raise awareness in the community about what it is we are working on at SPMC and about the environment that is right in their own backyard.

The last two Saturdays I have helped bring a touch tank from Shannon Point to the Kids Are Best Fest and Bivalve Bash. I worked with some of the oth 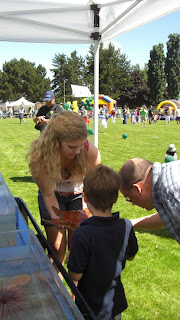 er interns and graduate students to share some of the local intertidal organisms with the people of the area. This was a chance for me to work on allowing people to work on answering their own questions and inquiring further about the animals in the area when interacting with them at the tanks. It was hard at first not to immediately answer the question and end the interaction, but after a bit of practice I was able to have a dialogue with the people who were visiting the touch tanks.

Each festival had an entirely different target group who was visiting. At Kids Are Best Fest, we were mainly sharing the animals with, you guessed it, kids. Parents were often interested in the organisms as well, and helped their children work up the courage to touch some of the more unusual looking animals. One of the favorite animals of all the kids was the leather star we had (pictured below), mainly because of its size and color. It was great to see all the kids get the wide-eyed look of astonishment as I would pull the huge star out of the water and let them all feel it. One of the most common questions asked was whether or not the sea stars were alive or dead or if they were fake. Without the typical head with the eyes and mouth that most children expect to see on an animal, the sea stars and many of the other organisms we had in the tanks helped them learn more about the variation in the animals on this planet.

At Bivalve Bash, we had a much wider audience of people who came to check out the animals. Most commonly, it w 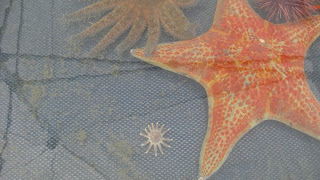 as adults who were visiting, but they often just wanted to look at and discuss the animals rather than touch them. The kids who came by, though, were more than eager to get a chance to feel some of the organisms. Working with more adults was a chance for me to really work at helping challenge them to puzzle their way through figuring out what the animal was by using what prior knowledge they had. Although it was often tempting to simply rattle of the common name and a few random facts about the animals, having them answer their own questions allowed them to learn more and helped create a conversation about the organisms in our coastal waters.

It was wonderful to be able to help the people who have lived here most of their lives learn more about the animals that live in the environment around them. Some of them had no idea about what sort of animals live in the tide pools around them and were pleasantly surprised to learn about the interesting creatures living right in their own backyard.
Posted by Sarah DeLand at 10:48 PM