This week has been a lesson in parasite morphology. It has long been speculated that parasites in hatchery fish may be different than the parasites in their wild counterparts. In theory fish that develop in wild waterways consume the many invertebrates that carry trophic parasites. As the fish take advantage of this food source they take on passengers in their digestive tracts. Hatchery fish eat primarily pellets that they are fed and rarely have the option of consuming invertebrates. The first step in supporting this theory is gathering evidence.

The process of gathering this information is similar to the other parasite collections that we have done in the past. Coho salmon are retained from a hatchery (in this case one on Bingham Creek WA.) and wild ones from a nearby fish trap (also on Bingham Creek). The fish are examined under a dissecting microscope for signs of scarring, possibly caused by parasites entering through the skin. The weight and length are recorded, and the fish is dissected.

In the past the organ that I have been involved in analyzing is the kidney. The dissection of these fish in this case also includes the stomach and intestines.
Great care needs to be taken when opening up the stomach and intestine because any parasites that are found need to have their location in the digestive tract recorded. It is also important to correctly identify what species the parasites are. At first they just look like many tiny grains of rice, with little to tell them apart, but with a keen eye (and some guidance) one can began to decipher the morphological code. Below are a few examples of what a person can expect to find in a coho salmon from Bingham creek.

Crepidostomum sp. Is identified by the half crown of two to six papillae, this gives the appearance of cartoon like ears. It is long and oval in shape and like the other parasites we look at they have two suckers.

Deropegus aspina. The body of Deropegus is slightly elongated when compared to the other parasites present. The most defining feature is the presence of vitellaria in two compact masses near the posterior of the trematode.

Plagioporus shawi. This parasite has a slightly flattened body, it is elliptical in shape. One of the defining features is a pair of testes visible in the center of the body. 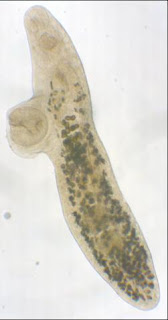 In the end we hope to find a correlation between the parasites and where fish reared to better understand the importance of rearing strategies on trohpically transmitted parasites. For now I will work on honing my skills in identifying these little guys.
Posted by Thomas Stinson at 10:37 AM