Wow. I can’t believe this journey is almost over. It’s week eight and we are still going strong. This week we went out to the Siletz River and collected snails. Many trematodes use a snail as an intermediate host and are released as cercaria. We collected two types of snails and placed them in petri dishes with a bit of lettuce and observed them as they released the cercaria. There isn’t really a way to predict what type of cercaria will be released, so every petri dish holds a surprise. Below is one of the cercaria that we found; it is nicknamed medusa for obvious reasons. It is composed of many single cercaria that attach themselves to each other at the tail. When they are ready to continue their life cycle they release and exist as single organisms. 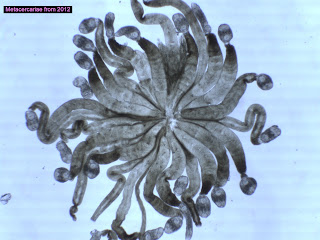 Here is another trematode cercaria. One snail released thousands of these guys. They look like little pieces of ribbon in the bottom of the dish until they decide to move, and then they become more cylindrically shaped and move in a rapid figure eight motion. Watching a large group of them swim is hypnotizing. 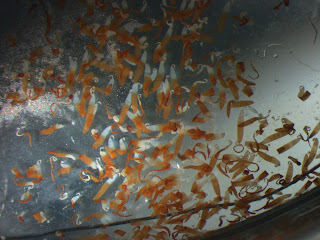 Here is a picture of the parasite that I’ve been studying, Nanophyetus salmincola. This is a picture of it in its cercarial stage. You can see in the picture that its tail is still attached, but when it enters the salmon it detaches and the body encysts. 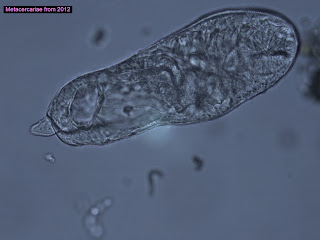 Snailing was fun but I have a presentation to give on Friday and I still have data to enter. Looking back at the pages of data that I have produced during this internship reminds me just how important it is. This is the first time this data set has been looked at, and once it is fully analyzed it should be very valuable in understanding the bigger picture of juvenile salmon habits.
Posted by Thomas Stinson at 10:52 AM