In the fifth week of the internship, all of the OIMB interns in Charleston and the Hatfield Marine Science Center interns from Newport got the chance to come together and show off our projects. The COSEE PRIME program makes a huge effort to support communication and collaboration among scientists, which is such a great initiative. Having spent many hours in the lab, I can see how a researcher could become so involved in their work that they don't get the chance to see what other scientists are doing in similar fields. However, collaboration is so important, because the results that you get under a microscope could heavily influence the work of another researcher doing a similar project.

On Wednesday, Coty and Drew came down to Charleston with their adviser Itchung. I showed them all my project and let them watch the little ascidians pump water into themselves. Every once in a while, the organisms will contract their branchial baskets and close their siphons as if they are coughing or exhaling. From what I've read, this is to keep large particles from entering their incurrent siphons. This reaction is touch-sensitive, so sometimes I will tickle the ascidian with a single hair (that's how small and sensitive they are) and watch them contract. Later on that afternoon, we all went out with Professor Jan Hodder to see some marine mammal action at Cape Arago. Seals and sea lions sunbathed on the rocks, and a few gray whales broke the surface every few minutes.

On Thursday, Karyn, Jess, and I with our adviser, Coral, went up to Newport to visit with the interns there and see their projects. This was the first day in over 3 weeks that I took a full day off and didn't look at my petri dishes! It was nice to have a little break and it gave me time to reflect on my project progression and to write in my research notebook. We got to stomp around in the mud with Drew, and visit Coty's bird-watching location. It was a nice trip, but good to come back home! 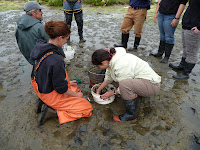 Playing around in the mud was fun. I got to use a huge siphon to suck shrimp out of the mud. We saw ghost shrimp and mud shrimp. 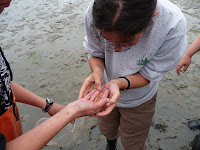 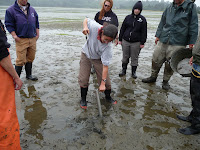 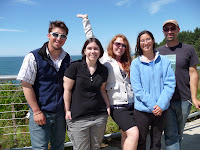 We had a blast at Cape Arago looking out at the marine mammals.
Posted by Akiko Onuma at 11:15 AM