Jess - Sometimes We Have To Adjust 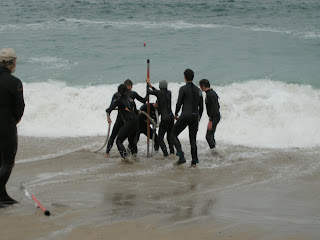 To collect samples of zooplankton and phytoplankton from the surf-zone we use a pump that sucks water up from the surf through a hose. The zooplankton (animal plankton) is concentrated in a plankton-catch net and put in samples jars that are to be counted later. The phytoplankton (photosynthetic plankton) samples are collected by filling bottles with the water that we are sucking up with the pump and are then fixed with iodine. So we don't have to hold the hose out in the surf everyday when we are collecting the samples (which could be pretty risky and dangerous) we put a line of poles from the middle of the surf-zone to midway up the beach to secure the hose to with u-bolts and brackets. We did this the week of June 12th, and as you can see from the picture it took a number of people to do it successfully. Because the ocean is very powerful and constantly changing the physical structure of the beach and moving the sand, this last week two of our poles became dislodged. 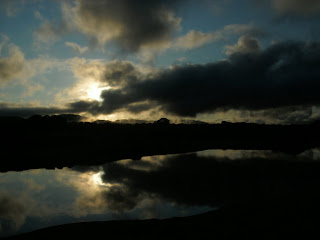 We needed to get the poles back in as soon as possible and because it is difficult to get the poles in while getting pounded by waves we needed to do it at the lowest tide possible, which just so happened to be at dawn. We arrived on the beach before daylight and got to work. It was early and chilly but we got to see this amazing sunrise. The picture doesn't do it justice. Watching it rise in the company of a bunch of awesome people made me happy to wake up in the dark and start work at dawn.