I arrived at OIMB this week, a big change from Monterey. Never having gone anywhere for an extended amount of time without knowing anyone as well as never having even been to California, going to Monterey was a whole new experience that made me excited and extremely nervous at the same time. Within two week's time this brand new life-style became my normal routine and the only nervous feelings I had left came from the anticipation of my final presentation (those feelings are still there). Coming to Charleston wasn't as nerve-racking because I just went through a similar experience and was prepared for the change. The first night of going to sleep not knowing what was in store for the next day was a little strange, especially without everyone that became my little biology-team family right down the hall. It didn't take long to get used to though, and by Friday Alan was back to work in the lab and I had my nose back in a microscope. 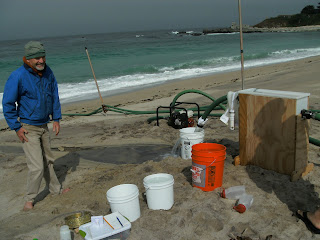 One of the questions I was asked was how did we collect the samples that we spend so many hours counting? Well, there are a few answers to that question. Collecting samples from the surf zone was done by using this pump set-up. We secured a hose to poles that were driven roughly four feet into the sand. With the intake stationed in the surfzone, we connected the other end of the hose to a pump that sucked water from the surf up through the hose and routed the water through a sand-trap (the box apparatus in the picture) to reduce the amount of sand in the sample. Water was filtered through a net for ten minutes per sample, and we took three zooplankton samples everyday at high tide. Phyto samples were taken by filling liter jugs with water from the sand-trap. 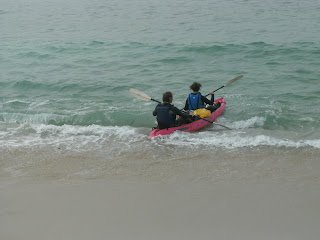 To collect samples from offshore we did plankton tows from a kayak. I discovered that I easily got sea-sick so Daniel and Marley mostly did this job and I stayed on shore working the pump. They most often collected samples doing vertical tows, where they would lower the net to the bottom of the bay with the net tied to a rope with marked increments and pull it straight up. But they also did horizontal and newston tows. Horizontal tows are samples taken by dragging the net parallel to the surface of the water for a measured amount of time. A flowmeter in the net records how much water is filtered through the net, but it doesn't always work. Newston tows are plankton tows taken at an angle where the net starts deep and as you move the kayak you pull it up at an angle. Keeping track of which samples are from what method is done with waterproof paper and numbered jars. When we have the samples, we process them (meaning will kill the zooplankton with formalin or fix the phytoplankton with iodine) and concentrate them down, put them under a microscope and start counting. Yay!
Posted by Jessica Noseff at 7:54 PM