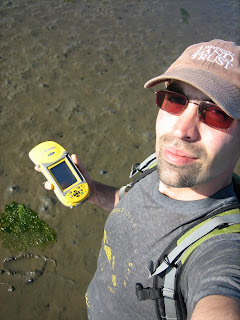 My progress in the stat program R is coming along and early in the week Katelyn and I were able put a few of my newfound skills to use. Admittedly, we were using a sequence of code that Katelyn had developed sometime in the past and we only had to update and modify a little to get the information we needed but I still felt good about what we did. The results we obtained are significant to the method of sampling and the number of samples that need to be taken throughout the shrimp area.

Katelyn is developing a way to sample the entire Idaho mudflat, which is in the Yaquina Bay, by coring the intertidal mudflat and counting the number of shrimp. Without going into too much detail (because I don't know enough) she has determined that 10 large cores throughout Idaho Flats calculated randomly by our cohort Lee, the computing/programing/wizard/technician, will give us a number of shrimp in the bay within 25% of the actual number. We also take other information from the samples like sex, weight, and carapace length but the main project that we are doing is the number of shrimp per core.


So the large core is very heavy (25lbs which is difficult to lug around all over a mudflat that you are constantly sinking into) and it is a fair amount of work to dig out the core and then sieve all of the sand to filter out the shrimp. The small core is more like a clam gun, very portable, no shovel needed and potentially able to collect a representative population of shrimp but this is science right? We can't just say that the small core would probably work and that a bunch of cores will do the trick. We need proof that it would work. So by comparing the core samples (large and small) from last week in R we were able to figure out whether or not they were collecting similar ratios of shrimp per area and determine how many numbers of small cores we need to take. Cool right? 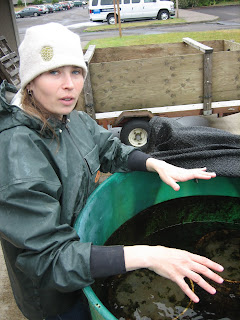 After that I got to go do some more intern-like things. I cleaned out these tanks that Katelyn Bosley is standing next to because too much algae is bad for the shrimp. It turned out to be a breeze cleaning the tanks and now they are beautiful and clean.
So the next step in our efforts begins with having a map that shows the outlines of the shrimp populations. Now there are two species that we are talking about: Upogebia pugettensis (muds) and Neotrypaea californiensis (ghosts). The muds are filter feeders (or at least that is the hypothesis) and ghosts are deposition feeders. Muds live at a lower elevation in the intertidal zone and ghosts live higher with muds sometimes crossing into their territory. A map was created a couple of years ago using GPS to map the boundaries of the populations and this is very similar to what I am doing now. We then use quadrats to measure number of shrimp burrow holes per square meter which has been shown to correlate to number of shrimp per square meter. This gives us a map with population boundaries and density.


That R program I keep talking about, well it takes that map and those densities and calculates a weighted (we know the boundaries and the densities) random small core sampling that will tell us the number of shrimp in the bay! (with some uncertainty) 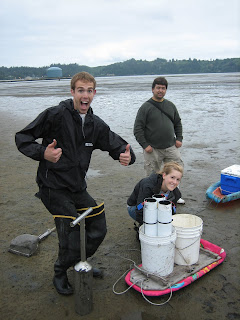 Another team of interns were out in the mud doing some sampling of their own. They are working with the parasites of the shrimp and boy do they look excited. 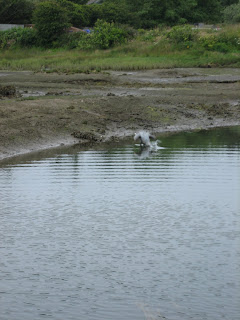 While I was on the return leg of some mapping this week I was standing close to a Blue Heron and watched it stalk and then catch a fish! This is the action shot of the bird's head in the water about to show its new fish.
It was a pretty exciting week and next week Lee will be back in town and Katelyn and I can get a random sampling grid to start collecting some shrimp.
Posted by Drew D Hill at 1:02 PM