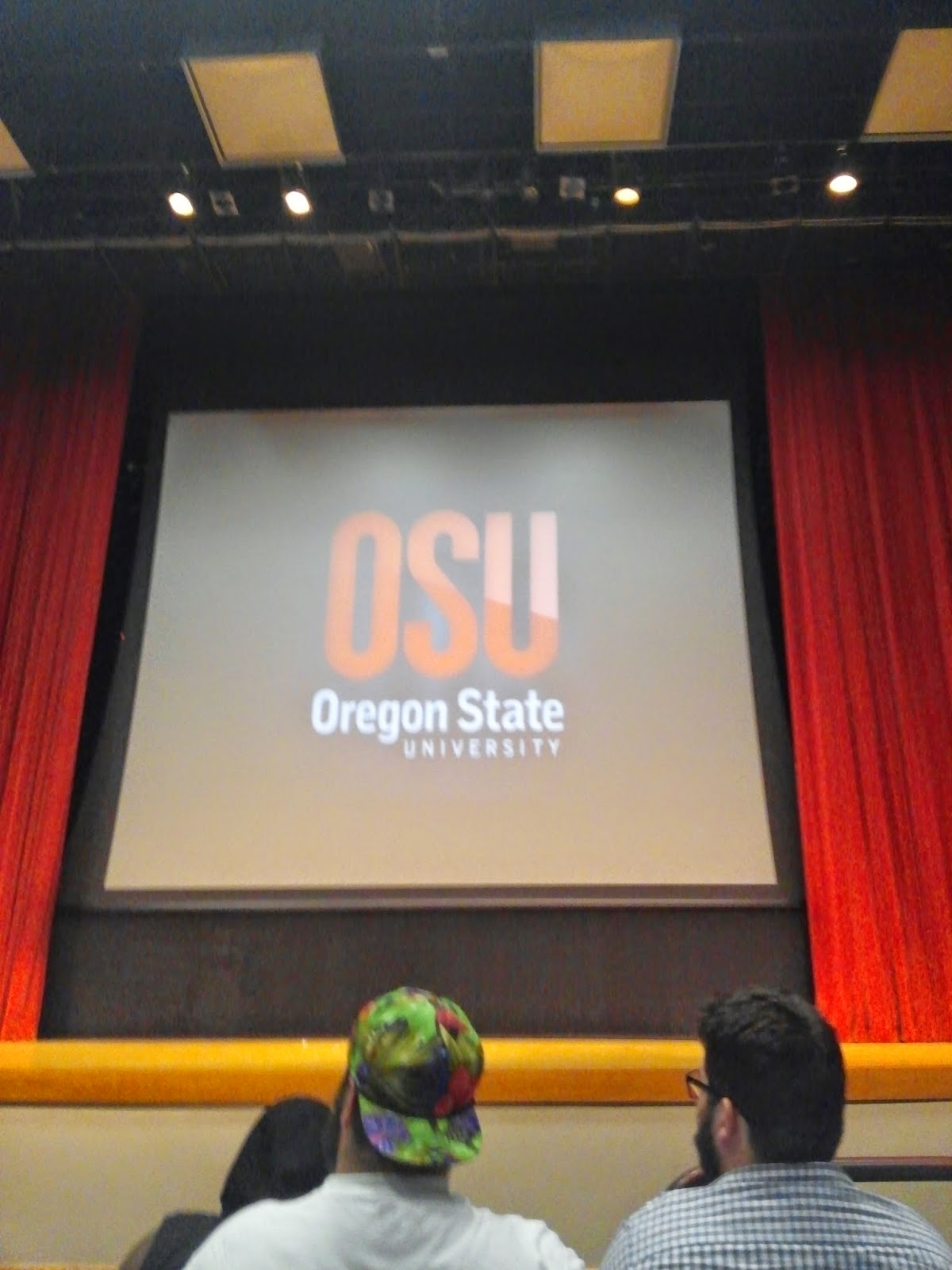 This last week has been a whirlwind of learning and new experiences. To name a few things; there was a lab safety meeting at a NOAA facility that all interns attended, I officially became part of Beaver Nation during the week, and I learned about visual or storytelling communications at the Oregon Department of Fish and Wildlife (ODFW).  On a side note, I attended a new student orientation at OSU last Tuesday, and felt so grateful to be associated with both Hatfield and the Corvallis campus (see image on right).

In addition, I bought a wetsuit for myself this week; which I will need in the following weeks. Why will I need a wetsuit? I will be going out this next week on the Oregon Coast Aquarium's boat, the Gracie Lynn, to collect data from marine reserves sites and a control sight. When put simply, two divers retrieve a buoy-like contraption which holds juvenile fish. Once it's on board, the crew captures the fish and terminates them for purposes of identification and data collection over at Oregon State University. This week, I will attempt to collect the buoy and get it back on board. Thus, the wetsuit.

NOAA TRAINING
As boring as it might be, safety training is essential to every scientist and future scientists. I'll be quite honest, I've never taken a chemistry course in my life, and this new material was fascinating to me. I learned about the system of universal safety signs (Global Harmonization), and what to do with hazardous waste, among many other neat things. Keeping things brief, I am now prepared to step into a lab when the time is right! Let's move onto to something more exciting!

SOCIAL MEDIA "STORYTELLING COMMUNICATIONS"
To break things down I've been working with another intern, Hannah, in order to bring fresh eyes to the ODFW's Oregon Marine Reserves Flickr page https://www.flickr.com/groups/oregonmarinereserves/. We have been narrowing down the abundant amount of pictures on the web page, standardizing captions and making sure tags match the images while staying consistent. I have also been working with photo editing applications, to fix any lighting issues or make them more visually appealing. I have worked on an array of project this past week, but I have shifted a majority of my focus towards this Flickr project. I'm also in the process of writing a variety of protocols for the Oregon Marine Reserve's page (I will delve into this further next week).


MARINE RESERVES AND MARINE PROTECTED AREAS, WHAT ARE THEY?

Marine Reserves  are remarkably simple, they are areas where nothing can be taken (no take) or disturbed. That means no activities where wildlife is disturbed or extracted: no fishing, crabbing, etc. PERIOD! These areas include Cape Falcon, Cascade Head, Otter Rock, Caper Perpetua and Redfish Rocks. Cape Falcon's laws don't go into affect until 2016.

Marine Protected Areas  are typically near marine reserves. Restrictions in these areas aren't as tight as the marine reserves, but many activities are still limited. Each area has different rules and regulations, which ODFW has all the details for (see number below). For example, Redfish Rocks marine protected areas allows crabbing and salmon trolling, among recreational salmon fishing. As I have learned these past few weeks, it is nearly impossible to keep up with all the rules that go with marine protected areas.

I had quite an exciting week, and I cannot wait for the endeavors that week three has for me!