Hi, my name is Laury Perry and I just finished my third and last year at Portland Community College. I will be transferring to Portland State University this fall, and I’m super excited about it. I am currently a biology major, but I’m interested in looking into majoring in either Marine Biology, or Environmental Science/Studies. I just turned 23 this week and got to spend my birthday out in the surf zone trying to catch some Chinook salmon; it was a pretty cool way to spend my birthday. I have been interested in marine biology since I was very young and had my first memorable experience at the Oregon Coast Aquarium. It was during the time when Keiko made a temporary home at the Aquarium. I was mesmerized by the harbor seals, and tried to teach them tricks through the glass. Well to my surprise they completely interacted with me, and followed my finger as I traced it around the window. I felt connected to them, and that’s when my love for the ocean and its inhabitants began.


I was extremely excited to have this opportunity to intern at the Hatfield Marine Science Center! Especially to be asked to intern for the project of my first choice! I am working with Dr. Jessica Miller and Jose Marin Jarrin (PhD Candidate), and their study on Chinook salmon (Oncorhynchus tshawtshca) and the role of the sandy beach surf zone as a habitat for Chinook salmon. Jose is my mentor and I’m so lucky to have him. He is awesome, fun, and super patient! He also really knows a lot about the ocean, and it’s a cool opportunity to have him teach me about the different invertebrates and vertebrates that live in the surf zone. Basically Jose is investigating why Chinook salmon leave estuaries at the time they do. Is it because of food? Are they finding valuable nutrition in the surf zone before they migrate out in the ocean? That’s where my job comes into play. I am helping Jose study the invertebrates and some small vertebrates that Chinook salmon eat. I am finding their energy values using a Bomb Calorimeter. I know the word “bomb” makes this process sound pretty intense, but it’s not exactly what you think.


It’s time to freshen up your chemistry knowledge just a little bit. A Bomb Calorimeter is a device using Calorimetry which is the science of measuring heat capacity, chemical reactions, or physical changes. The reason we want to know the heat capacity is that we can determine the energy given off of from the combustion (in joules) of the organisms the Chinook eat. We can then determine how much energy Chinook salmon are getting from eating certain invertebrates. This valuable knowledge tells us if they are getting valuable food sources in the surf zone rather than estuaries. 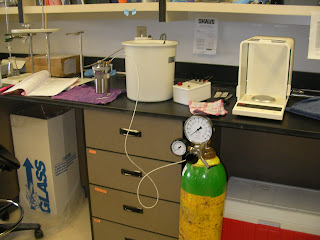 Chemistry lesson over! So below I want to show you some cool pictures of the Bomb Calorimeter itself. Let me just add, it is a very long and delicate process, that I have only recently started to master!
This is my work bench. To the very left just above my bomb manual is the lid to what I call "the science crock pot" which is just above the oxygen tank. On that lid is a thermometer and a rotator that circulates the water in the science crock pot. To the right of the lid is the actual bomb, and in this picture I am filling it with around 26-30 atmospheres of pressure (that’s a lot of pressure!). Next to my science crock pot is the ignition pad that I will ignite later, which makes the sample combust! And to the right of the ignition pad is an OHAUS Scale, which is super sensitive and really annoying to use. Not pictured is the water reservoir which is inside the science crock pot.
If you’re curious how the whole process works I will make a separate entry including the process step by step. This blog entry is just an introduction! 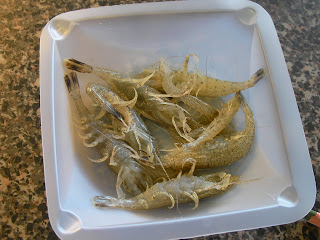 In the picture to the right are some smooth bay shrimp we caught out in the surf zone. You see that yucky grey stuff on their bellies?  Yeah, you guessed it; those are eggs. All the more energy for our little Chinook salmon! This picture was taken before I put the shrimp into a dehydrator, where I would then macerate the dried shrimp into a very fine powder, and blow them up in the bomb calorimeter! 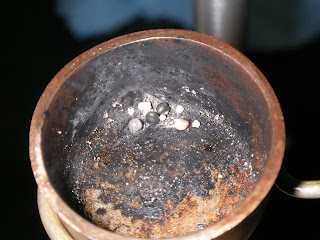 This next picture shows the leftovers of the shrimp after being combusted at an intense heat. Pretty intense stuff! And those small pellets are not eggs, they are the charcoaled remains of the smooth bay shrimp.
That’s all I have for you today! Next time I’ll talk more about the field work we do to collect these samples so I can bomb them!!
Posted by Laury Perry at 2:14 PM