Tuesday I met with Coral Gehrke at the Oregon Institute of Marine Biology (OIMB) in Charleston. She is the Coordinator for COSEE Pacific Partnerships. We went over the PRIME (Promoting Research Investigations in the Marine Environment) program outline notebook and she got me started. I then met my mentor for my internship with the South Slough National Estuarine Research Reserve (SSNERR), Dr. Steve Rumrill. The project we will be working on is the restoration of native Olympia oysters to the S. Slough and Coos Bay estuaries. 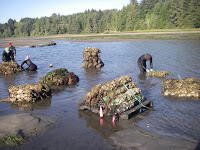 Next Monday is the lowest minus tide of the summer so we will be working out in the field. We will select one pallet pyramid of fourteen sacks of juvenile Olympia oysters set out in the South Slough by Younker Point (picture on right), and bring them back to the lab to study the growth and survival rate of the juvenile oysters in relation to the bags position in the pyramid, and we will collect any sea life that are using the pyramid for a habitat or are preying on the juvenile oysters. It will also be interesting to see what effects the silt and the epifouling algae, seaweed, and marine organisms and growing on the outside of the bags will have on the juvenile oysters.

I also have another project to work on when I can. I am to make two underwater camera mounts. One camera mount will be on the end of a handheld extension pole, and the other a sled to be towed behind a kayak at a range of depth down to about forty feet. I have several good ideas for this and hope to start on it soon. I believe the ideas I have will work, and that assembly, then trial and correction of error to work out the bugs. 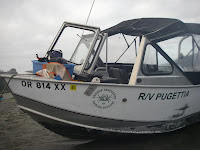 Once a week I will also run a water quality monitoring route to nine sites extending from the OIMB Boathouse, which is by the entrance of Coos Bay, as far up the Coos River as Sause Brothers’ Shipyard, and south out Hwy. 101 to the boat launch at Shinglehouse Slough.
Posted by Mark Burnap at 2:39 PM