sam - The Data Is in The Burrow 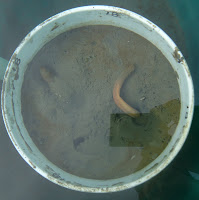 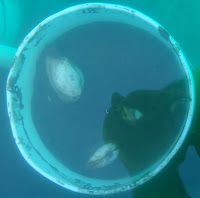 Literature tends to claim that gaper clams (Tresus capax) are virtually incapable of making new burrows when they are removed from their original homes. That might be valid for the large adult gapers, whose shells can reach over 20cm (about 8 inches) in length, but given enough time and some protection from predation, my juvenile specimens seem quite capable of reburying themselves. Compare the photo of the surface treatment group taken on the first day of the experiment (upper left) with one taken less than 6 days later (upper right). The object in the upper right photo that resembles an earthworm is part of a gaper's neck. The necks of Tresus capax have fused incurrent and excurrent siphons that allow food and water exchange with the clam's environment. 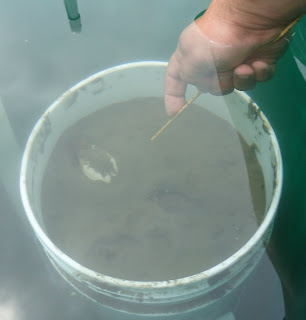 I measure how far my molluscan minions delve by using a thin wooden dowel marked with 1cm increments (left). If a gaper hasn't hidden its shell below the surface, I note how far the surface is from the clam's highest elevation and record it as a negative distance. If it has, I measure its depth by gently probing the opening of the burrow with the dowel until I feel the tip of the gaper's shell, pinch the dowel at the level of the surface with the thumb and index finger of my other hand, and pull the dowel out to get a reading.
Posted by Samuel Moore at 5:07 PM