Peter Sheesley – Week 8; The Summer, as I Remember It

Below are the main things I think of as I look back on the summer.

One of the best parts of going back to school is meeting new people. This summer did not disappoint. The types of people I had a chance to interact with were diverse. For example, they were inspiring, strange, knowledgeable, helpful, frustrating, pleasant, awkward, pragmatic, funny, and caring. I’d be willing to guess that I too covered a similar range in their assessment of interactions with me.

Probably 80% of my nights were spent watching episodes of the recent TV series, Dr. Who. I made it through several seasons during my internship time. This was an integral part of my summer experience—a ritual to end each day. Mostly, it was just a fun way to decompress at the end of the day. However, there is also a creativity and curiosity to the show that fit my overall internship experience. As the Dr. and his companions travel through time and space making discoveries and saving planets, I hope I am doing something similar in very much less grandiose, fictional, and direct ways.

A few times each week I was able to park my car in Cape Arago State Park and go for a short run along the road, through the forest, along the cliffs, out to the viewpoint and back. I’d also take a detour into the woods and find a somewhat level spot for practicing my Tae KwanDo forms. This return of mine to the same exercise spot established a connection between myself and the park. I got to know the sounds and smells along the way, and got to see the place at different times of day in different weather. I will not forget the place, and it will hold a special place in my heart.

The Amazing Little Things in the Ocean:

The accounts of one’s first look at phytoplankton under the microscope are often full of marvel, and mine was no different: I marveled at the marvelousness. What appears to the naked eye as brown slime becomes an amazing array of jewel-like forms under the microscope. Not only are they organized and intricate, they are also diverse. Learning to name and identify these little gems was a true pleasure.

I’m so glad the program included a final 15-minute presentation of what we did over the summer. This gave me an opportunity to review and personally organize some of the basics of what I learned over the summer, the main emphasis of our research, and also to analyze some of our data. It also gave me the experience of presenting the material in front of peers and experts.

Looking at the Data:

There was something very satisfying about both putting the data into a spreadsheet, and looking at it on graphs. In some ways it felt like the experience of finally getting to taste something you’ve just spent a bunch of time and energy cooking. Figuring out how to look at the data, and how to think about it also resembles playing a game: you try different ideas, and figure out which approach yields results.

This is probably the most ineffable part of the experience. What I mean by “feeling” marine science is likely vague. I’ll try to explain. First, I’m not just talking about an immediate emotion I have in response to marine science. Instead I’m trying to get at the overall gestalt of it in my experience. I’m trying to look at the place, people, subject matter, climate, and compatibility with my own interests. I’m asking the question, what does it feel like for my life to be involved in the marine sciences? Another way of putting it is, how does marine science fit on me? When I put it on, how does it feel? As vague as this question may seem, it is equally difficult to answer. In some ways the only answer is the actual experience of doing it. Trying to describe it is like trying to describe a painting to someone instead of letting them actually see it. Nevertheless there is likely some benefit to trying.

There is a quote from Confucius that reads, “The wise find joy in water; the benevolent find joy in mountains.” There is more to the quote, and the context of the statement is important in order to understand it. However, what I find interesting about it is the idea that some are drawn to the water and others to the mountains. And he seems to be saying there are inherent characteristics of the person that make them so choose. This summer I found myself asking this question, “Am I an ocean person?” I find the ocean fascinating, beautiful, and mysterious. But do I feel it in my bones? The answer came to me unexpectedly. I had been spending most of my time on the beach, looking at the ocean, looking at water samples, smelling the ocean, riding the waves. Then one day I went for a walk in the woods behind the campus. The answer was the woods. When I was young I went on a roller coaster ride that swirled through trees and greenery. It was magical. Every time I’m in the woods they enchant me. On this walk through the woods behind campus I remembered that I am a woods person. That doesn’t necessarily mean I can’t or shouldn’t study marine science. I do think there is something to it though. I even started to wonder if there are two different types of music. There is music of the ocean and music of the woods. As I listened to different songs or artists, it was consistently clear which was which. Bob Marley, Paul Simon, The Beattles—they are ocean music. Led Zeppelin, The Doors, Bob Dylan—this is music of the woods.

Thinking About My Future:

There was an informative talk during the summer about going to graduate school in the marine sciences. I was surprised at how strongly I reacted against the thought that I might be studying and working towards a career in academia. It’s strange to me because I enjoy doing the studying and the research, but the thought of becoming a professor again does not interest me at all (at least not right now). I am more interested in working in a lab somewhere to make discoveries and contributions, but not as an academic faculty member. This presents some difficulty because my understanding is that much of biological science study that has theoretical or creative roots leads in this direction. The good thing is that I have a stronger sense of what I’m interested in, and can make choices as I further my education that will lead in the right direction.

My Favorite Picture from the Summer:

Finally, this is my favorite picture because I collected the sample off the docks and discovered this little sea star brachiolaria larva. What an amazing life form! 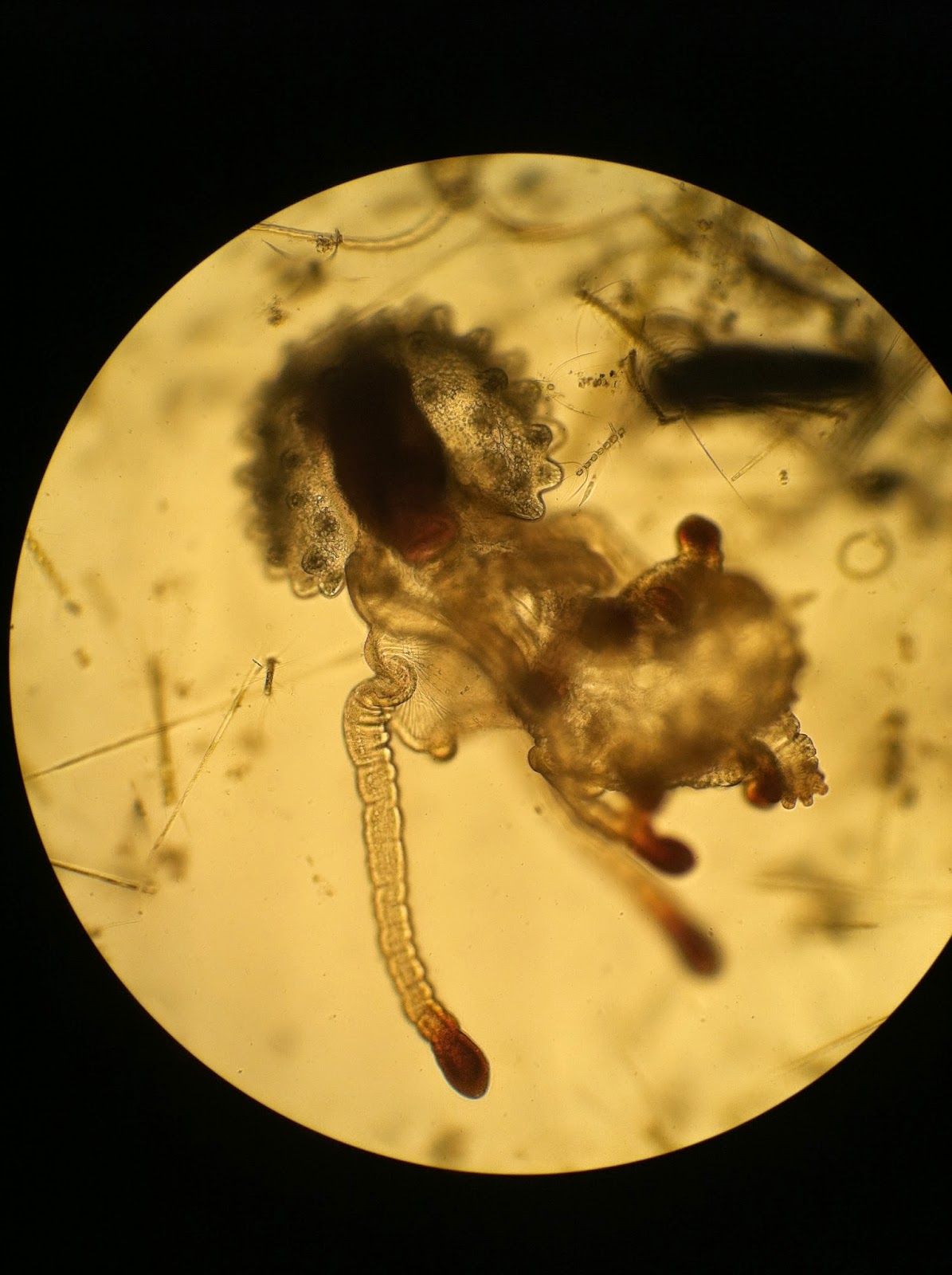 Many thank you's to all who made this summer possible!
Peter

Posted by Peter Sheesley at 2:00 PM