Well the fish cutting party was a complete success. 1000 fish in two and a half days and nobody got hurt. In case you are curious what a “fish cutting party” is like here is a brief description.

The first step is to transform two rooms into what looks a little like a field hospital in a third world country. Tables are set up and wrapped in absorbent, water proof cloths. Plastic place mats are set at each station along with some glass beakers filled with bleach and clean water. Each station also has an assortment of surgical tools like scalpels, tweezers picks and scissors. 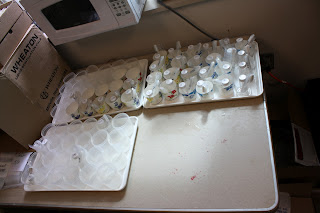 The next step is to set up and organize the labeled bags, vials and jars that will hold the various samples from the fish. Each vessel is labeled with a corresponding salmon ID number that was given to a fish upon collection and placed in a cup that will be delivered to the cutting station with the fish. 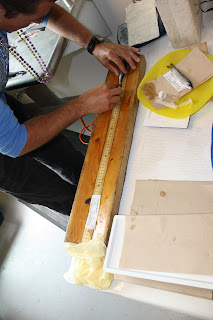 Fish are identified by species, weighed, measured and inspected for tags or markings either given to them by workers at the hatchery or from life in the wild. Some may have talon marks from birds or wounds from lamprey bites. Others may have a fin clipped or even a latex tattoo on the cheek under the eye. Each fish is run through a scanner. If there is a tag the scanner will produce a number code that can identify the fish, its point of origin and species. It may even have a point of release and a size. This type of information can be useful to scientists in figuring out where the fish are spending their time, over all fitness and migration habits. 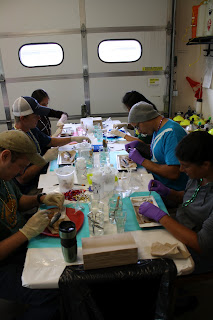 Once the necessary information is recorded the fish are picked up from the staging area and brought to a station where they are meticulously dissected to remove key internal parts as well as a DNA sample and in some cases a bone from the ear called an otolith. All of these samples are carefully packaged and frozen for later analysis. Prizes were even handed out to those that found an internal tag or a surprise parasite. 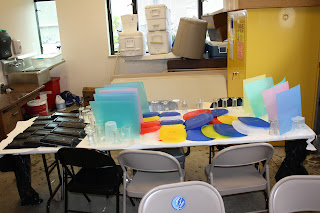 The thing that impressed me the most about the fish cutting party was how well everyone worked together; people from every level working toward a single goal in a fast and efficient manner with no complaints. From the set up to the daily dish washing to the final take down everyone pitched in to make light work for the group.

It was a long two and a half days but in the end a lot of information was recorded and many samples were taken that will help us learn more about the fish at hand. Great job team!
Posted by Thomas Stinson at 4:09 PM