This week’s work took me to the Columbia River for a two day trip to gather a population sample of sub-yearling salmon. These Salmon will be used to continue research on growth, development, genetics, health and a myriad of other things. The collection method on this day was a fishing technique known as purse seining. Purse seining is a good method to take samples in an area because the net is the same size every time you deploy it and it is stationary so unlike a towed trawling net the purse seine net captures organisms in the same size area each time. This is advantageous because it can tell someone what is in that area at that given time. 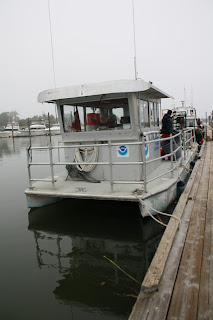 The operation requires two boats; the main boat and a skiff. The main boat is designed for this purpose and is outfitted with a winch, a boom and a water pump. The deck is large and open on one side to allow for the net to be hauled on board. 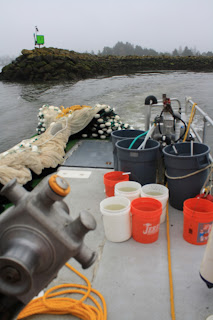 The skiff is smaller an looks much like a fishing boat that you might see on a lake with the exception of an anchor point that the net is attached to while it is being deployed. The smaller boat shadows the larger boat for the majority of the day and I was constantly amazed at the degree of skill that the operators of both vessels showed throughout the day. 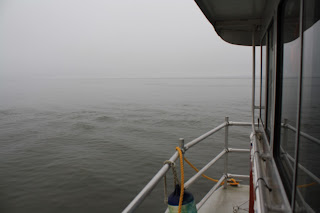 Day one started out with smooth waters and cloudy skies. After a safety and equipment check we headed out into the mighty Columbia. The drive across the flat water took about 25 minutes. Once we reached the correct location we quickly got to work and began to deploy the net. After some preparations were made a rope which is fastened to one end of the net is thrown to the skiff driver who hooks it to his boat and pulls away. 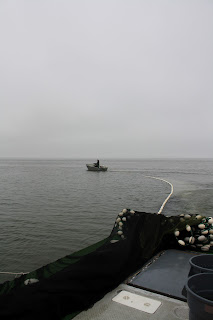 As the skiff driver pulls the rope the net begins to slither off of the boat and into the water. The bottom of the net is weighted and sinks. The top is lined with floats which float behind the skiff. The 500 foot long net is stretched in a large circle and the skiff driver brings his end back to the boat where it is reunited with its opposite side. 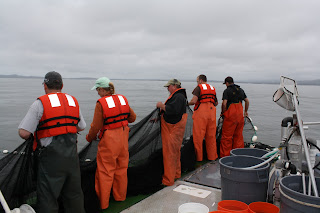 When the circle is complete a large weight is dropped into the water to close the bottom of the net and the net is pulled in by hand, the whole crew helps with this task and it is carefully piled back on the deck for the next deployment. Fish are collected, identified, weighed, and the samples which we set out to collect are quickly frozen and stored for later analysis. Other fish are simply recorded and let go without harm. 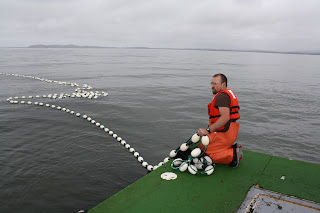 The net is deployed many times throughout the tide as a way to identify when the fish are where in the water, in relation to tidal changes. The location also changes to see where the majority of the population is at a given time. Many types of fish were collected from herring to anchovies, salmon and smelt. During the final haul of the first day I was shocked to see the water in the net boiling as it was pulled onto the boat. I found it difficult to focus my eyes on what it was that was causing this phenomenon but as it got closer to the surface I realized that we had caught an estimated 16,000 anchovies! Luckily we only had to count a small portion of them and all were released back into the ocean. 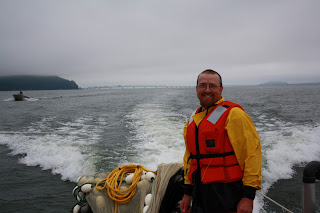 A quick thank you to Brian the skipper of the Pelican who’s expertise got us out and back both days without the slightest difficulty. I do enjoy watching someone who is a master of their craft, perform a skillful task as if it is the most natural thing in the world. What a great opportunity!

Posted by Thomas Stinson at 7:22 PM