Michaela- Weeks one and two

Hello! My name is Michaela and I am at Hatfield Marine Science Center for my internship with COSEE PRIME. I attend Oregon Coast Community College for my associates degree in Aquarium Science. I just moved to Newport for the Aquarium Science Program in September from Iowa. I learned that I am the first OCCC student to be a COSEE intern, which I thought was odd since the college is so close to HMSC. I found out about the internship by a former graduate of the Aquarium Science Program. I knew I was going to be in Newport for the summer so I applied for the internship. 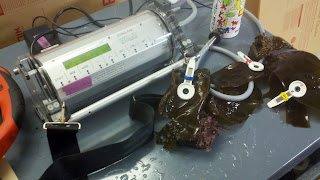 I work with Leigh Tait on research about ocean acidification impacts on Corallina algae. So far we have done one experiment with two types of Corallina algae, Corallina vancouveriensis and Bossiella orbigniana. We put these algae under a metal halide light and then dark adapt them for a set amount of time so we could measure their recovery rate with a PAM Fluorometer. We determined that the species were similar in recovery rates after doing multiple tests with different times under direct lighting.  The algae also had some kelp, Saccharina spp., attached with their holdfasts on our samples of rocks with the coralline spp. The kelp relies on Corallina to be able to attach to rocks and it was important that we tested the kelp with the fluorometer to see if they were healthy after being placed in a lab for over a week. The results were showing that the kelp was healthy. 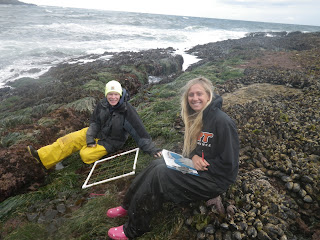 After this experiment was over we had to wait for more CO2 to start our next experiments. I went out with grad students from where Leigh works for, PISCO- Partnership for Interdisciplinary Studies of Coastal Oceans, to do field surveys in Depoe Bay. After a few days working with them Leigh took me out collecting for new samples of Corallina algae. I look forwarded to starting more experiments this week and will update you on what the experiments are that we will be doing.
Posted by Michaela Semple at 2:17 PM