One of my favorite aspects of living on a rocky coast line in Oregon has been the excitement that comes with a series of exceptionally low tides, and the ability it gives you to further explore tide pools, remote coves, mud flats, etc.  Although I may not be dependent upon these low tides for food foraging, it turns out that a lot of field work revolves around these tidal fluctuations.  Although our work studying the formations of an oceanographic front do not rely upon these low tides, we are also using settling plates (in our case clear plastic squares about 4 x 4 inches) to see what larvae may be settling on the rocks around it at that time.  Because of the vertical stratification of organisms in the intertidal, what larvae settle on your plate may be heavily influenced by what depth you have placed your plates at.  If you were attempting to capture barnacle larvae, you would want to place your plates higher in the intertidal than if you were looking for larvae from a lower tidal species like a sponge.  Here are some photos of our settlement plates, which we placed at roughly a -1 ft tide level. 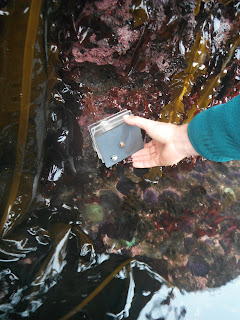 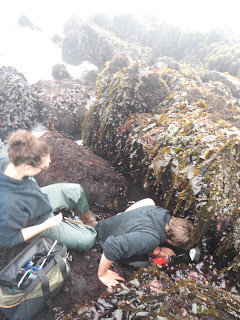 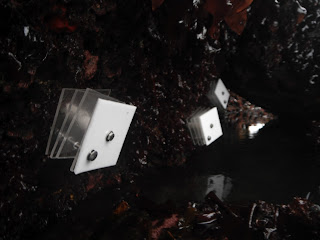 In addition to my work with Marley I was encouraged to develop a small study of my own during the internship.  With some guidance from Alan Shank’s I decided to look at diel vertical migration, a pattern of migration to surface waters at night and to depth during the day,  of larvae in Sunset Bay.  Just like the local front formations that Marley is studying, diel vertical migration occurs on very large scales in the open ocean but my study will be done in shallow waters within sunset bay.  To do the study I will be towing for plankton, using a kayak, at 2 meters depth and at the surface during the day and at night.  To allow for statistical analysis I will need to perform three tows for each depth and have decided to tow on three different days, July 18th, 26th and August 1st corresponding with the new moon, first quarter moon, and full moon.  My first outing on the 18th went well, with clear differences in larvae from depth to surface but my samples have not yet been quantified.  The night tows were especially interesting with the bioluminescent organisms lighting up the water with every paddle stroke and making a flying v formation off the front of the kayak.  I’m looking forward to the 26th. 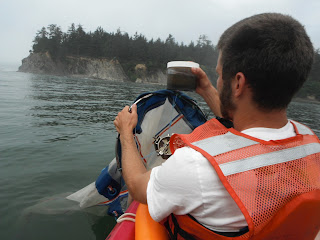