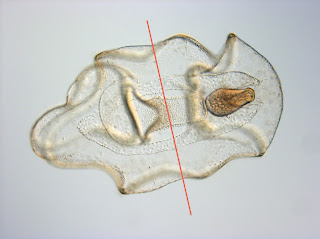 I've recently started a project involving the bisection of Patiria miniata (sea star) larvae. The photograph to the right shows a whole larva before bisection. The red line shows the approximate location of the bisecting cut.
The cut is done with a pulled needle or the edge of a hypodermic needle. Pulled needles are extremely thin glass, the end of which is flexible enough to move the larvae around and roll them over, while further up, the needle is firm enough to cut through the larva. I broke roughly 25 of the pulled needles in one afternoon learning how to use them, which George (my PI) warned me would probably be the case. It was a pretty steep learning curve, but now I can bisect many larvae (maybe 50 to 100) without breaking a needle. I have found that as the larvae get older, the thickening of their esophagus makes it increasingly difficult to bisect. To remedy this issue, I have been using a hypodermic needle to bisect the older larvae. The tip of a hypodermic needle has an edge that is basically a tiny razor blade, which allows me to make precise and thorough cuts. 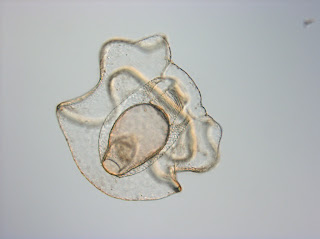 Posterior end of the bisected larva. The stomach is lightly pink from a recent meal of Rhodymenia palmate, the red marine algae that these larvae eat. 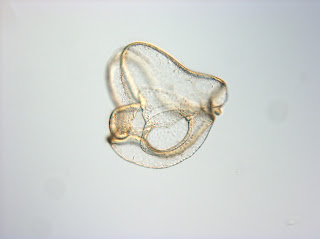 Anterior end of the bisected larva. The open hole has been formed due to cutting through the esophagus as it opens into the mouth.

I've been fixing the larvae about 5 days after wounding, which is when we begin to see significant remodeling. Initially, the larvae repair the wound by covering it. Then the ciliary bands start to grow to join back together. Next, tissue is built to complete the broken digestive system. Given enough time, each half of the bisected larva is able to regenerate completely and mature to metamorphosis. Given this impressive ability not only to repair, but to fully regrow, the intracellular signaling pathways that govern wound repair are of great interest. The fixed larvae will be stained with a few antibodies to target the signaling pathways of interest.  I am continuing my testing of antibodies on the Dendraster excentricus larvae. I will have more information about these trials as well as confocal pictures next week.
Posted by Keira Roberts at 8:40 PM