This week, I've been wounding Dendraster excentricus (sand dollar) larvae with a 488nm (wavelength of the light) Argon (the medium which emits light) laser. The laser is attached to the same microscope I use to take pictures and allows me to inflict very precise and consistent wounds. 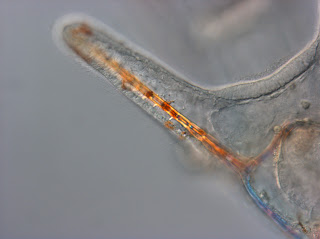 This is a "before" photo showing a close up of one of the arms of the D. excentricus larva. This was taken with 200 times magnification. 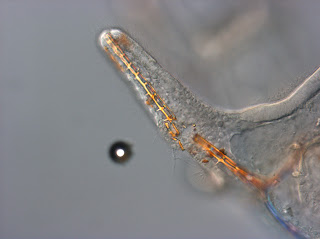 This is a photo of the same larva taken just after I shot its arm off with the laser. The spicule (looks orange in this photo) has clearly been broken by the laser. The small bubble that appears to the left of the larva tells me that the laser power was set higher than necessary. I want to blow the arm off but minimize damage to the rest of the body and if the laser is creating enough turbulence to cause bubble formation, it is likely that is will harm the larvae excessively.


I try to inflict the wound in the same area on all larvae. This takes a little practice since the larvae are not perfectly uniform in size and shape, but it does make the tracking of limb regrowth much easier. After inflicting wounds on the larvae, I take them off of the slide and split them into dishes of wounded and whole larvae. Then, I measure the regrowth of the missing arms over the course of several days. The following photos were taken as I tracked wound repair. 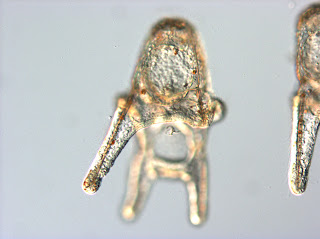 This larva is showing the first stage of wound repair: it has just managed to close tissue over the wound but has not demonstrated any regrowth of the limb (in terms of length). This photograph was taken  1 day after wounding. 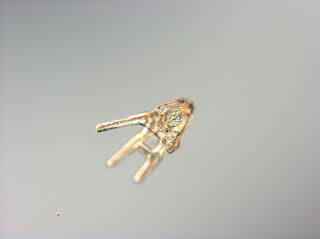 This larvae is at a similar stage in regrowth although the wound appears to be more thoroughly closed. This was taken 2 days after wounding. 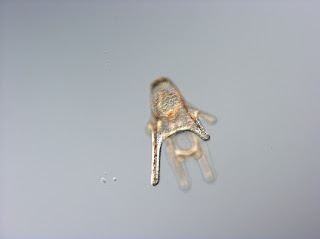 This larva shows full closure of the wound as well as significant regrowth in arm length. The arm was shot off in the same area as the previously shown larvae. This was taken 4 days after wounding.

I'm planning to start a new round of wounding tomorrow to give me a chance to practice the accuracy of my laser wounding as well as the careful transfer of the larvae onto/off of the slides. Then on Wednesday, I'll fix about 200 larvae and test out a few fluorescent antibodies to see if they work in echinoderms. I'll let you know more about that next week!
Posted by Keira Roberts at 10:46 PM