My name is Kailey Gabrian-Voorhees and I am a returning college student in the midst of a career change. About three years ago I was working in law and felt very unfulfilled with my career so I decided to do something about it.  The marine world has fascinated me since childhood and after some research I decided to pursue a BS in Marine Biology from Western Washington University. In preparation I attended Whatcom Community College through Spring 2012 in preparation for applying  to WWU.  I was recently accepted into the marine biology program and will begin attending WWU in fall 2012. While at WCC I was lucky enough to have Dr. John Rousseau as a biology instructor who not only served as a great inspiration but also informed me about the COSEE-PRIME summer research internship opportunity.  I jumped at the prospect to get some hands-on experience in my chosen field and was lucky enough to be selected.


I get to spend this summer working with Dr. Paul Dinnel on the restoration of the native Olympia oyster in the Puget Sound and more specifically in Fidalgo Bay.  This project is a collaboration between WWU and the Skagit County Marine Resources Committee, it started some years ago with the goal of creating self-sustaining native oyster beds.  In 2002, 2003, 2004 and 2006 native oyster seed was planted in Fidalgo Bay in several sites and the oysters at what is referred to as the “Trestle Site” have shown good survival and growth.  We will be spending the lowest tides along with volunteers investigating how far the oysters have spread from the original seeding site at the Trestle.


I also spent a few days counting and measuring juvenile oysters in what are known as shell bags (bags full of oyster shells) that were placed in various locations around Fidalgo Bay.  All of this data from Fidalgo Bay will be used to identify possible future sites that may become oyster beds as well as allowing the best possible use of the Trestle site. 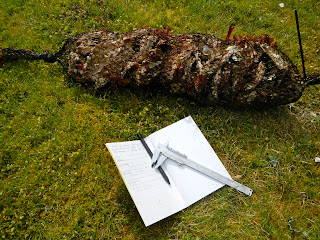 Above is a shell bag and my tools, below is a juvenile native Olympia Oyster approximately 5 mm. 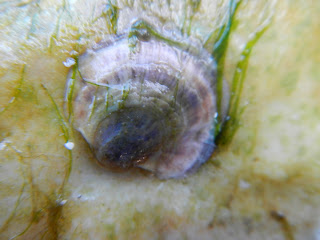 Dr. Dinnel and myself also collected temperature and salinity sensors at several additional sites around Skagit County that are being considered for native oyster restoration projects.  If the data we retrieve is promising the sites could be seeded in the future as Fidalgo Bay was.


This first two weeks at Shannon Point could not have done more to strengthen my decision to enter the marine sciences.  I learn so much every day!  Along with the two COSEE-PRIME students here there are 9 REU undergraduate students from all over the US, a WWU undergrad, a marine sciences in the arts student from WWU documenting our projects, an AAUS diving intern as well as graduate students from WWU.  I do my best to learn about their projects as well and everyone seems very supportive and willing to help each other with fieldwork and to educate each other in general.


The faculty and staff here have done an amazing job at making us feel welcome and of introducing us to what Shannon Point has to offer.  We have gotten out onto one of the research vessels twice so far, once we used the ROV to explore, and then we had a marine mammal day where the local orcas were kind enough to make an appearance!  Additionally every Friday we have lunch with faculty, informal meals where usually they tell us how they ended up in marine science, what they study and why followed by a Q&A. Last but not least Shannon Point itself is breathtaking, in addition to the beach we are surrounded by the local deer, rabbits, dragonflies and a pack of coyotes that had quite a few pups this year.  I get more excited to be here every day. 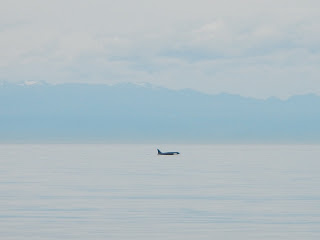 An orca from J-Pod we were lucky enough to see.