This last weekend a bunch of my fellow interns from Hatfield and I went to Da Vinci Days in Corvallis. It was a fun Art and Science festival that had a lot of informational booths as well as live performances. Some of the Science booths included a wave energy booth, a Sea Grant booth, a Remote Operated Vehicle (ROV) booth, a Geology booth, an Equine dentition booth, a local honey booth, and many more. The live performances included two juggling acts that were very entertaining and a Big Bad Voodoo Daddy concert. There were other performances, but those were the ones I went to. The swing band concert was a lot of fun because our whole group was dancing during it. Another event at this festival was the kinetic sculpture races, which is where people make man-powered sculptures that they then race through different challenges including a mud-pit and a float down part of the Willamette river. It was interesting to see how different people planned to meet the challenges. Over all, this festival made for a great Saturday!


On Tuesday Ella and I were able to go to the Siletz river and collect freshwater snails with two other interns, Chris and Shelby, and one of their mentors, Kym Jacobson. It was very exciting to be able to get out in the field! The beautiful river and sunshine made this a wonder day. After we collected the snails, we took the big ones back to the lab and put them each in their own Petri dish with water and a chunk of lettuce. The next day, after they had settled for a little while, we took each dish and looked at it under a dissecting scope to see if any parasites that had been on the snail had come out. If we found any parasites in the dish, then we would write down what we saw so Kym would know what to look for when she used these samples to show parasites to students in Corvallis. 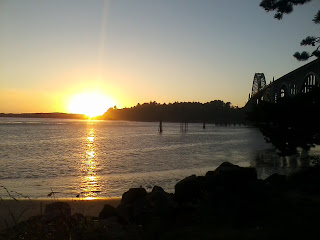 Lately, I have been able to enjoy the natural beauty of Newport by walking down to the beach after work. These walks make me appreciate how lucky I am to be living here on the Hatfield campus this summer where we are only a little over a mile away from the beach! Such a beautiful summer experience and it is sadly more than half way over.