In addition to the phenomenal research opportunities that we have been given the opportunity to experience here at OIMB, we have also been fortunate enough to have been placed in one of the most spectacular habitats on the west coast for anybody with even a vague interest in the outdoors.  As I mentioned in a previous blog post, we were able to tag along with the marine ecology class to the Lighthouse tidepools; below is a photograph demonstrating the incredible density of marine invertebrates seen in this habitat.

Some of the most notable organisms seen on this trip included a remarkably outgoing octopus, a plethora of nudibranchs, and of course the legendary gumboot chiton (Cryptochiton stelleri). Below left is a medium-sized sunflower star lurking beneath a submerged rock; this is a remarkably fast predator (for a sea star at least) that feeds on bivalves, gastropods, and variety of other intertidal invertebrates. Below right is a frosted nudibranch.  Another exciting specimen (for me at least) was a flowering surf grass (Phyllospadix sp.).

Over the weekend we were able to experience a variety of terrestrial flora and fauna during an extensive day-hike up to a fantastic waterfall about an hour and a half from the OIMB. Below left is a Pacific sideband, one of the most robust looking land snails that I have ever seen. Below right is a thick-headed fly captured mid-flight with a good deal of patience and a stroke of luck.  This insect may superficially resemble a wasp, but in fact it is a wasp parasite.

Thick-headed flies will intercept a wasp or bee mid-flight and aggressively insert an egg into the abdomen of the unwilling host.   Once the larva hatches it will feed on the host and eventually kill it... which actually makes this insect a parasitoid -  a parasite that feeds off of its host until the host either dies or is sterilized.  This is actually very common among insects. 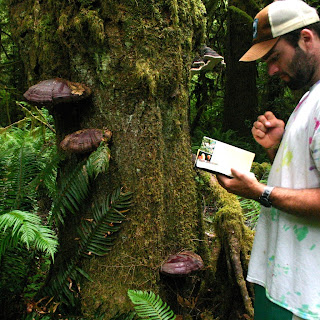 Oregon is well known for its excess amount of rain (at least by the standards of those of us from southern California) and consequently has a fantastic array of mushrooms.  To the left, OIMB resident mycology enthusiast Will Pischell simultaneously identifies a mushroom and snags a mosquito out of mid-air.  The three mushrooms on the left of the tree are Ganoderma organensis while the single mushroom flush with Will's hat is a Fomitopsis pinacola. Will has been a fantastic resource for identifying strange and mysterious mushrooms (of which there are many in Oregon) and is constantly coming up with new ways to play with these fascinating organisms.  The latest project has involved spore printing, which I have been helping him take DIC images of.  Below is a 2000X oil immersion image of an Amanita sp. spore print. 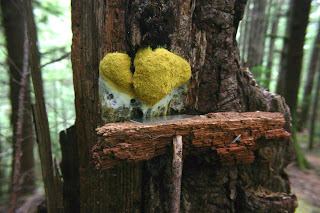 These spore prints are often collected in the field, the image to the left shows the (attempted) process of collecting spores from a slime mold: a piece of bark propped up with a stick and supporting a microscope slide. Unfortunately this sketchy apparatus did not last long enough to collect any spores.  The image below is a Hydnellum tentatively identified as Hydnellum auratile.  This particular species secretes a brilliant amber colored liquid that is difficult to see in the photograph but VERY cool to see in person.