This week I finished collecting the mapping points for Katelyn Bosley's population estimate and  model for burrowing shrimp in Yaquina Bay.  I also went out with my trusty slurp gun and collected samples of Upogebia puttegensis and Neotrypaea californiensis and started dissections of their gastric mills--an organ similar to a crop in grasshoppers that is full of grinding teeth to mash up food in the foregut.  My original goal was to look for calicfied structures such as the gastric mill and eye stalks and use them to age the crustaceans by counting annuall rings.  This technique has worked in other crustaceans but as I set out to try this techniqu on mud and ghost shrimp I discovered that the eyestalks of both shrimp, particularly the N. californiensis were too small and not feesible to use as an accurate measure of age or calcification.  Now I am focusing on getting intact lateral teeth from the mill and embedding them in epoxy resin, much like you would an otolith, to cut the sections small enough that I can mount them on a slide, photograph them, and count and measure the annual rings (if there are any...). The complete gastric mill is shown below under 4X magnification. 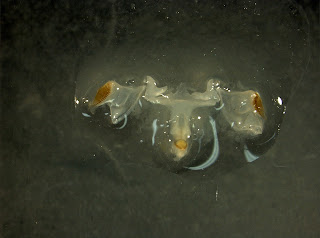 This week I also helped Dr. Dumbauld collect more shell bags which were used to attract Dungeness crabs to different areas in the estuary.  The samples we take of the sea grass and crabs will help us see how the biodiversity of the estuary is affected, if at all, by the Zostera japonica invasive sea grass.

I also had the incredible opportunity to tour a NOAA (National Oceanic and Atmospheric Administration) research vessel, the Bell Shimada. Officer Michael of NOAA Corps gave us a guided tour of the vessel, including the bridge with an almost 360-degree view and the trawl nets that they use to collect hake and sardines.  This is the first NOAA vessel to target collection surveys of two species of fish at once, and the trawl doors even empty into a hopper that ends in a conveyor belt leading straight to the wet lab.  Here, the scientists can efficiently determine the size, sex, and weight of the fish they collect. During the tour, I felt as if I were onboard the starship Enterprise and it was truly amazing to see all of the work and equipment that goes into each research cruise. 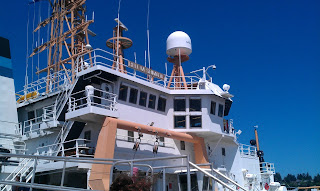 I had another wonderful week at Hatfield and am looking forward to cutting and mounting my specimens to identify growth patterns next week. 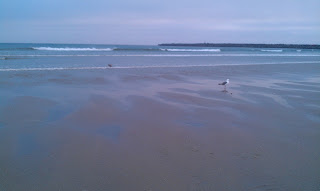 A view of the Pacific from South Beach, Newport

Posted by Natalie Coleman at 9:04 PM