This past week has been an adventure. Right from the get go Steve, Justin and Mitch scheduled me to volunteer with SeaCor, which is a team of ODFW research biologists working on estuary habitat assessment along the coast. SeaCor’s current project in Newport involved comparing samples from two different locations in Yaquina Bay to see wether or not particularly Gaper clams were relocating in a recently disturbed location near the newly built NOAA docks. The sampling work is being done as part of a mitigation deal between the Port of Newport and the Department of State Lands. Due to the habitat loss from the installation of the docking facilities for the NOAA fleet, considerable large scale dredging took place, most likely killing any shellfish present. So now the Port of Newport must sample the disturbed site and compare it to a undisturbed site once a year for a seven year period to see if shellfish are recolonizing beneath the dock. My part in this project was very simple. I was assisting the team by throwing point buoys and boat buoys. Point buoys indicate where the divers go to dredge. And boat buoys provide the dredging boat with a pre set anchor point to secure themselves to while they run the dredge for the divers. It took two full days to sample two sites, and man is pulling and throwing anchors all day hard work! But it was very satisfying being able to sort through the dredging samples with the biologists and look for shellfish among the silt and shell tailings sitting at the bottom of the bay.

If Monday and Tuesday weren’t busy enough. Thursday I was invited to accompany Mitch and Kristan to the Oregon Coast Aquarium where they did a talk for a summer education program called “Edible Oceans”. Watching them communicate scientific information with the group was a real treat and got me thinking about my own public interactions and how I can improve them when implementing my survey.

Outside of work things have been good. I’ve been making lots of trips to Olalla Lake up near Toledo, where I’ve been swimming regularly in the relatively warm water. Along with exercising my right to surf as much as I can in the great Pacific. One thing I'm very excited about is repairing an old surf board shaped by a local shaper down in Florence that I recently found by the dumpster! Steve is stoked on the idea as well and is willing to help me out with it. I’m super lucky to have such great supervisors and friends here at Hatfield. 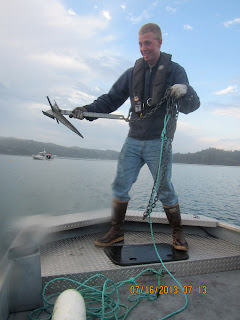 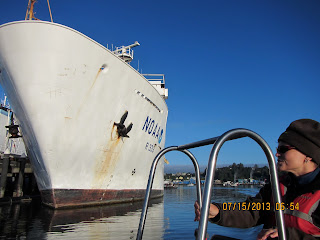