Misti - One does not simply walk onto mud flats...

M-W:
As I returned from the field last week, I spent most of this week recuperating and doing smaller tasks such as inputting data from the field into the database and meeting other members of the research team that I will be working with.

Idaho Flats is rife with burrowing shrimp beds and is a tappable source for research into these fascinating creatures.

As before, it comes with its own set of challenges. Tromping through the mudflats in my new steel-toed boots (bad choice for mud) and my new neoprene chest waders, (fantastic choice for anyone willing to pay an extra bit of money, though rather warm in direct sunlight) I followed my mentor, Brett Dumbauld toward a future rife with dirty dealings.

It turns out that if one wishes to find mud shrimp (Upogebia pugettensis) or ghost shrimp (Neotrypaea californiensis/Neotrypaea gigas) one must slosh through the muck to the areas pockmarked like brown and squishy swiss cheese. One step onto these soft areas and there is the potential for sinking as I found out directly after taking my first step onto Idaho Flats.

I have found the solution to this problem though--or at least a semblance of one. I call it mud-skiing. As I step onto the mud, I slide my foot forward and then quickly slide my next foot forward without holding my weight on one foot long enough to get stuck. This leaves lovely little boot trails all along the mud flats as if I really were skiing. Once I've skiied to the research site, I set up for my first burrowing shrimp dig.

My equipment for the day consists of the following: A bucket with the entire bottom removed to create a large hollow cylinder, an aquarium net, a box sieve and sample bags.

My mission: Grab as many mud and ghost shrimp as I can at a 10 cm depth. It felt a bit like hungry hungry hippos, only it was more like: hungry hungry fistfuls of mud and the shrimp was a microscopic marble.

First, I take the bucket which we call a "core" and press it down into the mud at the desired depth. Then, with the core firmly entrenched in the squelching mud, I dig the mud out with my hands and plop it into the box sieve for careful sorting. I find the wettest patch of mud possible and start sieving which involves a sort of rocking motion from side to side as I search for my conquests. Like gold to miners, with each shrimp I am more excited. The reason for this is because we are looking for "recruits" tiny shrimp that measure from between 1-3mm in length. They are definitely post-larval, but so small that it is hard to find in the mixture of mud, sand and shell, so each find is a triumph.

Each miniscule shrimp is placed into our sample bag and before long, Brett and I have collected 10 cores of mud shrimp recruits. Next we head closer to the marshy areas to look for ghost shrimp. Surprising to me, but apparently not to Brett, we didn't find a single ghost shrimp recruit on the flats.
This is peculiar and I will explain why momentarily. After we take 10 cores of ghost shrimp as well, Brett and I slog back to the lab where we process the recruits. 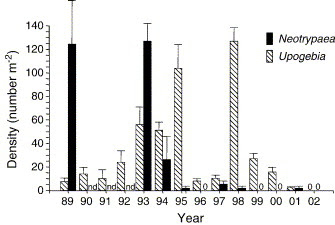 As I mentioned, each core had at least a few mud shrimp cores, though I am told that even the mud shrimp recruit numbers are much lower than they used to be as is evident in the graph to the right. (Figure 1) However, there were no ghost shrimp recruits. According to Brett, that has been happening in this area, but what is very strange to me is that there are "many" ghost shrimp adults...so...where are the adults coming from? If the ghost shrimp aren't having babies, then, how are there adults? I asked John   Chapman about this, and he says it is one of many mysteries still to be solved regarding the burrowing shrimp. His exact quote was "they just aren't having any babies", which again has me boggled. Brett says that it is possible that the recruits are just going somewhere else. I'm very curious to hear a definitive answer.

Friday:
I had the day off and left immediately for Eugene. Stay tuned for next week in which I learn how to dissect shrimp, use a camera lucida and "shoot" a shrimp gun!

Figure 1:
Brett's graph showing the decline of shrimp populations. Full article from which this graph was borrowed can be found here.